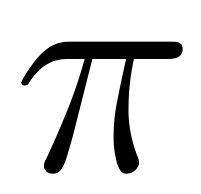 Greek letters are simple to represent in HTML and TeX. In both systems, the code for a letter is essentially its name. The letter name is capitalized to get the capitalized form. HTML surrounds the letter name with an ampersand and semicolon. TeX prefixes the name with a backslash. For example, in HTML, λ is &lambda; and Λ is &Lambda;. In TeX these are \lambda and \Lambda.

See note below about representing Greek letters in XML [2].

Note that the Unicode numbers above are consecutive with one exception: there is no Unicode character x3A2 between Ρ and Σ. The reason is given below. [3]

[1] TeX also has several variations on Greek letters that are commonly used in mathematics: \varepsilon, \vartheta, \varpi, \varrho, and \varphi.

[2] HTML entities are illegal in XML and but legal in XHTML. XML applications require a numeric encoding of Greek letters. (You can simply put Unicode characters directly into your HTML page provided you set your content-type correctly. However, character entities and hexadecimal encodings allow you to represent non-ASCII symbols using only ASCII characters.) You can create an XML numeric encoding from a Unicode character by adding &# on the left and ; on the right, such as &#x393; for Γ, Unicode value x393.

[3] The Unicode value of a lower-case Greek letter is the value of its upper-case counterpart plus x20. However, there is one complication. Greek has two forms of the lower-case sigma:  ς used only as the final letter of a word and the more familiar σ used everywhere else. That’s why there is no upper-case character x3A2 corresponding to the lower-case x3C2. The letter ς is an exception to the rule that HTML entities and TeX command sequences simply use the name of the Greek letter.