I ran across the word duodecimal recently, the Latin-derived term for base 12, and realized it’s been years, maybe decades, since I’d heard that term.

I’ve used hexadecimal explicitly in 30 different blog posts, and implicitly in more, but this is the first time I’ve used duodecimal.

Hexadecimal comes up constantly in application. I suppose duodecimal comes up mostly in teaching, an example of a base that is bigger than 10 but still easy to work with.

Here’s a plot of the relative frequency of “hexadecimal” and “duodecimal” according to Google’s ngram viewer. 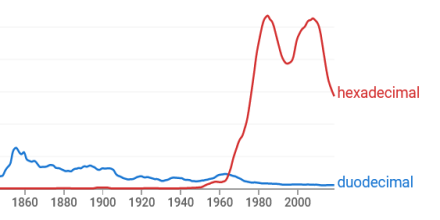 The use of the word duodecimal peaked in 1855—I have no idea why—and the word generally declined after that.

Merriam-Webster says that hexadecimal first appeared in 1954, though Google indicates a tiny number of uses before then. Clearly hexadecimal was either coined or became far more commonly used due to the development of computers.

It’s interesting that use of duodecimal rose in the 1950’s and 1960’s. I imagine this was in part due to people using base 12 as an example to explain base 16. Some of the rise in the 1960’s might have been from the “new math” education fad.

If we look at “base 12” versus “base 16” we see that use of “base 12” has declined, but not as much as use of the word “duodecimal” has declined. I suppose hexadecimal is in common use because it’s easy to abbreviate to “hex.” Saying “duo” for base 12 would not be nearly as understandable. 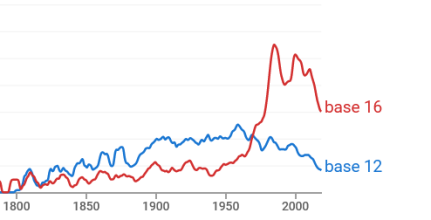 9 thoughts on “Duodecimal vs Hexadecimal”