Logarithms in all bases are proportional. Specifically

This post would like to turn the discussion above around: a multiple of a logarithm is just a logarithm in another base, and it’s easy to find what that new base is.

This is a multiple of a logarithm, and so there is some base b such that f(x) is log base b.

It turns out b is 101/10. That is, decibel levels are logarithms base

Where did this b come from? How can we show that it’s correct?

Let’s start by finding the inverse of f. The function f does two things to x: it takes the log base 10, then multiplies by 10. Its inverse undoes things in the opposite order, i.e. it divides by 10 and raises 10 to the result.

For possible future reference, let’s solve this problem in a little more generality, converting any multiple of a logarithm in any base to logarithm in another base.

And why multiply the decimal log by 10? Because then for single digit numbers, the original value and its decibel value have the same order of magnitude. And when x = 10, the two are equal. 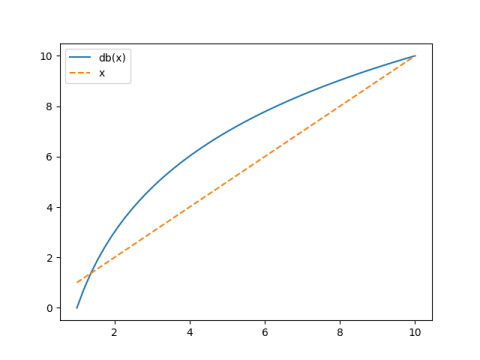