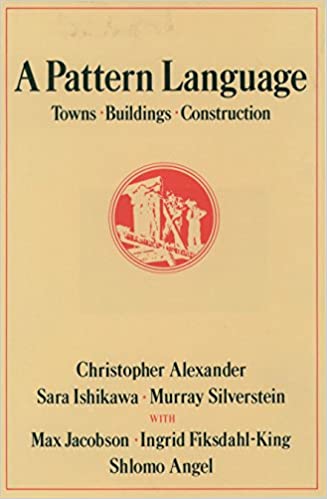 I first heard of the book A Pattern Language sometime in the 1990s. I had left academia, for the first time [1], and was working as a software developer. Although the book is about architecture, software developers were exited about the book because of its analogs to software development patterns. The “Gang of Four” book Design Patterns, a book about object oriented programming, was also popular at the time.

I now see more people citing A Pattern Language for its architectural content, though it’s still cited in software circles. A lot of people quote it on Twitter. I recently discovered @apatterntolearn, a Twitter account devoted to the book.

Ever since I ran into the book over 20 years ago I’ve intended to read it someday. I finally bought a copy a few weeks ago. I’ve blitzed through it, and I intend to go back through it more slowly.

Many quotes that I’d seen from Alexander have resonated with me, and I expected the book to do the same. That wasn’t my experience at first.

The book starts out abstract and becomes more concrete. I think the most quoted parts are later in the book. A few of the early patterns are quirky and controversial [2], but the book soon moves on to patterns that are more concrete and more widely accepted. For example, about midway through the book is the following observation.

If two parts of an office are too far apart, people will not move between them as often as they need to; and if they are more than one floor apart, there will be almost no communication between the two.

I noticed this early on in my career and found it bewildering. But it’s absolutely true, and in fact I might change “more than one floor apart” to “even one floor apart.”

The book talks a great deal about how to foster community, something we desperately need. Architecture is not the cause of or cure for strife, but architecture can create an environment where human interaction likely to be more frequent and more pleasant.

[1] I either left academia once or twice, depending on whether MD Anderson Cancer Center counts as academia. MDACC is a strange mix of hospital and university. I’d say my job there was semi-academic. I did some research and teaching, but I also did some software development and project management.

[2] I can sympathize with some of the quirky and/or controversial statements.

3 thoughts on “A Pattern Language”