This post will define ℓp distance and look at the average ℓp distance between points in the ℓp unit disk. We will compute this distance by simulation.

The ℓp unit disk is the points whose ℓp distance from the origin is less than or equal to 1.

When p = 2, ℓp distance is Euclidean distance and the ℓp unit disk is the ordinary unit disk.

When p = 1 the distance between two points is the sum of the absolute differences in their coordinates and the unit disk is a diamond.

For p = ∞ the distance if defined by the limit of the ℓp distance, which works out to be the maximum absolute difference in any two coordinates. The unit disk becomes a square.

Suppose we pick two points uniformly from an ℓp disk and ask how far apart they are in ℓp distance. The expected value is studied in [1]. The authors give exact values for a few special cases.

This suggests that the average distance decreases at first then at some point it starts increasing again. Where’s the minimum? Is there only one local minimum?

A pair of exponents (p, q) is said to be conjugate

which is the case for (1, ∞). From this scant bit of evidence I’d conjecture that the average distance is the same for conjugate exponents. If so, there’s a sort of symmetry around p = 2 and so perhaps the minimum average distance occurs at p = 2.

The code uses acceptance-rejection sampling to generate points in the ℓp disk: it generates points from a square around the disk and throws away points until it gets a point inside the disk. 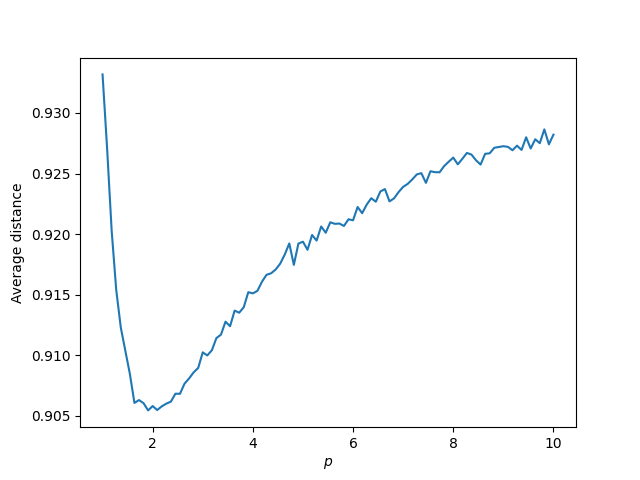 The code above is slow. I wrote the rest of this post while waiting for the plot to finish. In particular, I made my conjecture above before seeing the plot. It seems that the minimum may indeed be at p = 2, and that the curve is monotonic on either side. (The jaggedness of the plot is presumably an artifact of simulation.)

So the simulation results are consistent with my conjecture. I may try to prove the conjecture analytically or speed up the numerical results with integration.

3 thoughts on “Average lp distance in a disk”