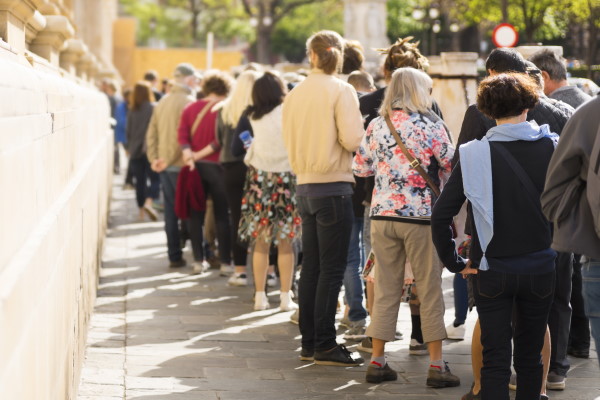 It is well known that adult male heights follow a normal (Gaussian) distribution. The same is true of adult female heights. What does the distribution of adults in general look like? There are several qualitatively different answers depending on minor changes to some basic assumptions.

Under these assumptions, the probability density for a woman’s height is as follows.

The corresponding density for men is the same, shifted to the right.

If we assume an equal number of men and women, the probability density for the height of an adult without regard to sex is given below.

Note that this density is not Gaussian at all. Instead, it is very flat on top. You might reason that since the average of normal random variables is normal, adult heights should be normal. But we don’t have an average, we have a mixture. The density for the general adult population is a mixture of the male and female distributions. If you assigned a height to married couples as an average of the husband’s height and the wife’s height, the resulting value would be an average than a mixture and would follow a normal density.

The calculations above have assumed the proportions of men and women were exactly equal. If we assume women form 51% of the population, then the density becomes slightly asymmetrical.

After this page was first posted, I found out about a couple related references.

The American Statistician had an article Is Human Height Bimodal? on this topic in 2002.
That same year Andrew Gelman and Deborah Nolan published Teaching Statistics: A Bag of Tricks which also deals with this subject. Gelman and Nolan point out that the variance of men’s heights is slightly larger than that for women. If we assume a 50-50 split of men and women, but assume male heights have a standard deviation of 3 inches while female heights have a standard deviation of 2.8 inches, this tilts the graph to the left more than assuming equal variance but unequal proportions above.