A category is a collection of objects and arrows between objects. Usually these “arrows” are functions, but in general they don’t have to be.

A natural transformation maps functors to functors. Sounds reasonable, but what does that mean?

You can think of a functor as a way to create a picture of one category inside another. Suppose you have some category and pick out two objects in that category, A and B, and suppose there is an arrow f between A and B. Then a functor F would take A and B and give you objects FA and FB in another category, and an arrow Ff between FA and FB. You could do the same with another functor G. So the objects A and B and the arrow between them in the first category have counterparts under the functors F and G in the new category as in the two diagrams below. 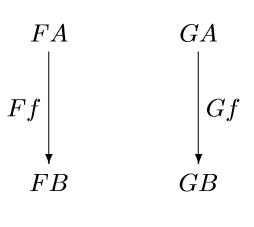 A natural transformation α between F and G is something that connects these two diagrams into one diagram that commutes. 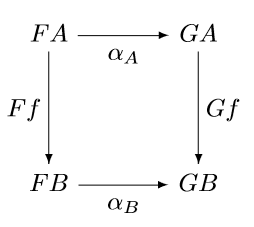 The natural transformation α is a collection of arrows in the new category, one for every object in the original category. So we have an arrow αA for the object A and another arrow αB for the object B. These arrows are called the components of α at A and B respectively.

Note that the components of α depend on the objects A and B but not on the arrow f. If f represents any other arrow from A to B in the original category, the same arrows αA and αB fill in the diagram.

The next post will discuss the canonical examples of natural and unnatural transformations.