To first approximation, Earth is a sphere. A more accurate description is that the earth is an oblate spheroid, the polar axis being a little shorter than the equatorial diameter. See details here. Other planets are also oblate spheroids as well. Jupiter is further from spherical than the earth is more oblate.

The general equation for the surface of an ellipsoid is 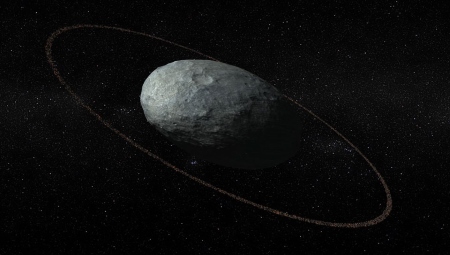 The dwarf planet Haumea is far from spherical. It’s not even a spheroid. It’s a general (tri-axial) ellipsoid, with a, b, and c being quite distinct. It’s three semi-axes are approximately 1000, 750, and 500 kilometers. The dimensions are not known very accurately. The image above is an artists conception of Haumea and its ring, via Astronomy Picture of the Day.

This post explains how to compute the volume and surface area of an ellipsoid. See that post for details. Here we’ll just copy the Python code from that post.

One thought on “Ellipsoid geometry and Haumea”