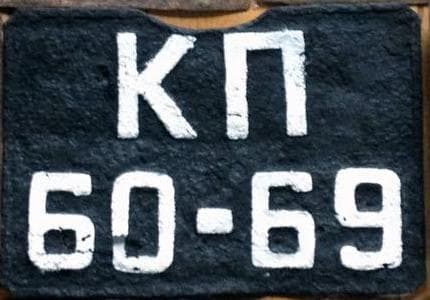 Physicist Lev Landau used to play a mental game with Soviet license plates [1]. The plates had the form of two digits, a dash, two more digits, and some letters.

Rules of the game

His game was to apply high school math operators to the numbers on both side of the dash so that the dash could be replaced by an equal sign. For example, given the license plate 44-74, one solution would be

Is there a solution for every possible license plate? That depends on what class of operators you allow.

It turns out there’s a universal solution, starting with the observation that

If one side is greater than the other by one, the formula above gives an immediate solution. For example, a solution for the license plate 89-88 would be

If the difference is greater, the formula can be applied repeatedly. For example, we could apply the formula twice to obtain

Given that a solution is always possible, we can make the game more interesting by looking for the simplest solution. We have some intuitive idea what this means. With our example of 44-74, the first solution

is simpler than the universal solution

which would require applying secant and arctangent each 30 times.

To make this precise, we need to specify what our programming language is, and that’s not as easy as it sounds. If we think of mathematics notation as a programming language, do we want to count ! as one character and arctan as 6 characters? That doesn’t seem right. If we wrote “arctan” as “atn” we would use fewer characters without producing a different solution.

To make things more objective, we could look at the length of actual computer programs rather than imagining math notation to be a programming language. Say we choose Python. Then here are a couple functions that compute our two solutions for license plate 44-74.

We could measure the complexity of our functions f and g by counting the number of characters in each one. But there still are difficulties.

What about the import statement? It should count toward the length of f because it uses everything imported but g could have used a shorter statement that only imported sqrt. More fundamentally, are we cheating by even importing a library?

Furthermore, the two functions above don’t produce exactly the same output due to limited precision. We could imagine that our imported functions are infinitely precise, but then we’re not really using Python but rather an idealized version of Python.

And what about the loop? That introduced new digits, 3 and 0, and so violates the rules of Landau’s game. So should we unroll the loop before calculating complexity?

Kolmogorov complexity is a very useful concept, but it’s more of a thought experiment than something you can practically compute. We can imagine the shortest program to compute something, but we can seldom know that we’ve actually found such a program. All we can know in practice is upper bounds.

However, it is possible to compute the length of particular programs if we deal with some of the complications mentioned above. We could make Landau’s game a two-player game by seeing who could come up with the simpler solution in a fixed amount of time.

If we allow sine and degree in our set of operators, there’s a universal solution due to B. S. Gorobets. For n ≥ 6, n! is a multiple of 360, and so

And if n is less than 6, it’s two-digit representation begins with zero, so we can multiply the digits to get zero.

If we disallow transcendental functions, we block Gorobets’ trick and we have functions whose length we can objectively measure in a programming language.

[2] In addition to having to test an exponentially growing set of programs, there’s the problem of knowing if even one program will complete.

If you run a program and see it complete, then you know it completes! If you don’t see it complete, it might just need more time, or it might never finish. The halting problem theorem says that there’s no program that can tell whether another arbitrary program will terminate. You still might be able to determine whether a particular program terminates, but you might not.

7 thoughts on “The Soviet license plate game and Kolmogorov complexity”