Elliptic curves are pure and applied, concrete and abstract, simple and complex.

Elliptic curves are very concrete. There are some subtleties in the definition—more on that in a moment—but they’re essentially the set of point satisfying a simple equation. And yet a lot of extremely abstract mathematics has been developed out of necessity to study these simple objects. And while the objects are in some sense simple, the questions that people naturally ask about them are far from simple. 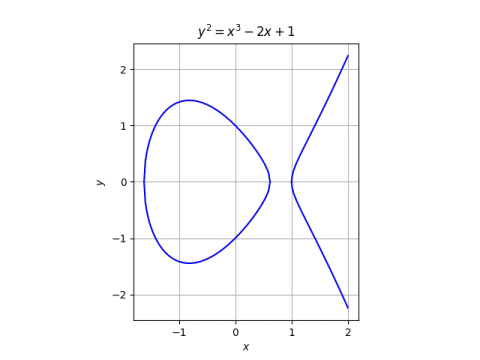 This is a theorem, not a definition, and it requires some qualifications. The values x, y, a, and b come from some field, and that field is an important part of the definition of an elliptic curve. If that field is the real numbers, then all elliptic curves do have the form above, known as the Weierstrass form. For fields of characteristic 2 or 3, the Weierstrass form isn’t general enough. Also, we require that

The other day I wrote about Curve1174, a particular elliptic curve used in cryptography. The points on this curve satisfy

Not an ellipse, not a curve

An elliptic curve is not an ellipse, and it may not be a curve in the usual sense.

There is a connection between elliptic curves and ellipses, but it’s indirect. Elliptic curves are related to the integrals you would write down to find the length of a portion of an ellipse.

In this section we’ll give the full definition of an algebraic curve, though we’ll be deliberately vague about some of the details.

Working over real numbers, smoothness can be specified in terms of derivatives. But that does smoothness mean working over a finite field? You take the derivative equations from the real case and extend them by analogy to other fields. You can “differentiate” polynomials in settings where you can’t take limits by defining derivatives algebraically. (The condition 4a³ + 27b² ≠ 0 above is to guarantee smoothness.)

Informally, projective means we add “points at infinity” as necessary to make things more consistent. Formally, we’re not actually working with pairs of coordinates (x, y) but equivalence classes of triples of coordinates (x, y, z). You can usually think in terms of pairs of values, but the extra value is there when you need it to deal with points at infinity. More on that here.

An algebraic curve is the set of points satisfying a polynomial equation.

The specified point O, often the point at infinity, is the location of the identity element for the group addition. In the post on Curve1174, we go into the addition in detail, and the zero point is (0, 1).

In elliptic curve cryptography, it’s necessary to specify another point, a base point, which is the generator for a subgroup. This post gives an example, specifying the base point on secp256k1, a curve used in the implementation of Bitcoin.

2 thoughts on “What is an elliptic curve?”