Many times on this blog I’ve argued that the difference between pure and applied math is motivation. As my graduate advisor used to say, “Applied mathematics is not a subject classification. It’s an attitude.” 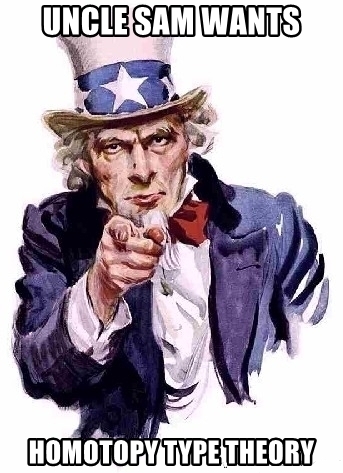 Traditionally there was general agreement regarding what is pure math and what is applied. Number theory and topology, for example, are pure, while differential equations and numerical analysis are applied.

But then public key cryptography and topological data analysis brought number theory and topology over into the applied column, at least for some people. And there are people working in differential equations and numerical analysis that aren’t actually interested in applications. It would be more accurate to say that some areas of math are more directly and more commonly applied than others. Also, some areas of math are predominantly filled with people interested in applications and some are not.

The US Army is interested in applying some areas of math that you would normally think of as very pure, including homotopy type theory (HoTT).

From an Army announcement:

And later in the same announcement

Homotopy Type Theory and its applications are such an area that is of significant interest in military applications.

HoTT isn’t the only area of math the Army announcement mentions. There are the usual suspects, such as (stochastic) PDEs, but also more ostensibly pure areas of math such as topology; the word “topological” appears 23 times in the document.

3 thoughts on “US Army applying new areas of math”