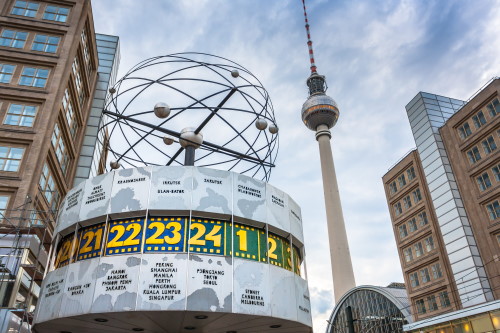 The earth’s rotation is slowing imperceptibly. Atomic clocks made is possible to measure how much it’s slowing down, but also make it necessary to measure. Now that atomic time is widely used, say to synchronize computer networks, the discrepancy between atomic time and astronomical observation matters.

Leap seconds have been inserted into the year occasionally to keep atomic time in sync with time relative to Earth’s rotation. These cannot be inserted on a regular basis like leap days because the change in Earth’s rotation is not regular. So committees have to decide how and when to insert leap seconds, and the process can be surprisingly acrimonious.

It is often said that Unix time is the number of seconds since the “Epoch,” midnight of January 1, 1970. But it’s not that simple because leap seconds are not included.

Suppose you were in London a few weeks ago. If you were sitting at a Linux command prompt to ring in the New Year and typed

at the stroke of midnight, the result would have been 1577836800. This number factors as

corresponding to the number of seconds in a day times the number of days since New Year’s Day 1970, including 12 leap days. However, if a device with an atomic clock beeped once per second since the Epoch, it would beep for the 1577836827th time as 2020 began because there have been 27 leap seconds since then.

If you don’t want to deal with Daylight Saving Time, you can use Universal Coordinated Time (UTC) [1]. If you want to go a step further and not deal with leap seconds, then International Atomic Time (TAI) is for you [2].

With TAI, every day has exactly 86,400 seconds by definition. When that many seconds pass, it’s a new day. Makes things very simple, as long as you don’t have to make reference to UTC, which tries to accommodate Earth’s rotation.

[1] Why is this not UCT? Because the French wanted to call it TUC for temps universel coordonné. The compromise was UTC, which doesn’t make sense in English or French.

[3] There are proposals to stop adding leap seconds, though the issue has been contentious. Maybe we won’t add any more leap seconds. Or maybe we’ll let them accumulate and add them all in at once, analogous to when several days were removed when converting from the Julian calendar to the Gregorian calendar.