This seems like a good time to discuss the difference between exponential growth and logistic growth as the covid19 pandemic is starting to look more like a logistic model and less like an exponential model, at least in many parts of the world [1]. This post is an expansion of a Twitter thread I wrote on AnalysisFact.

Nothing in the world grows exponentially forever.

The beginning of exponential growth is easier to understand that its end.

From the beginning there are factors that keep growth from being purely exponential, but they are negligible at first. They can be ignored for a while, but not forever.

A logistic model takes one limiting factor into account, but things could be much more complicated than that.

A system with exponential growth satisfies

A system with logistic growth satisfies

(Let me say one more time that this is a simplistic model. Please don’t read this then publish your own amateur analysis of a pandemic [2].)

In the logistic differential equation above, when y is near 0, 1 – y is approximately 1 and so that term has little effect. That’s why logistic models look like exponential models at first. Here are plots of exponential and logistic models with y(0) = 0.001, k = 0.1, and time running from 0 to 50. 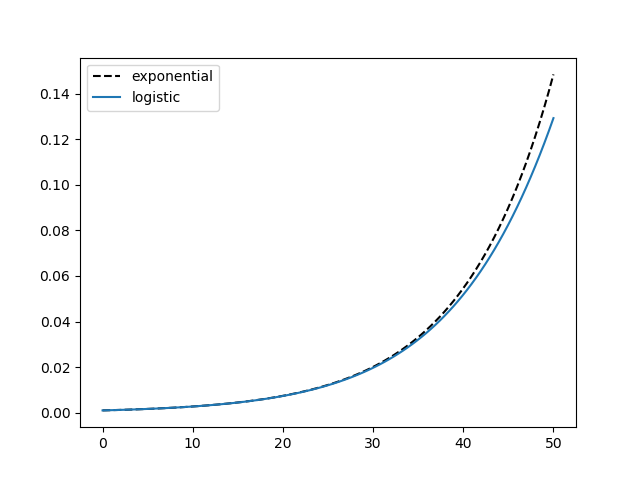 But the larger y gets, the more the 1 – y term matters more. Eventually it dominates. Here are the same functions for time running from 50 to 80. 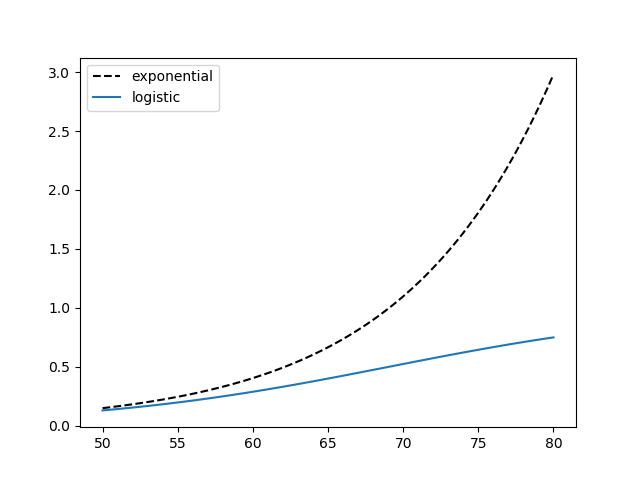 The logistic curve has a S shape and will flatten out, asymptotically approaching 1. Here’s a comparison of the two plots with time running from 0 to 100. 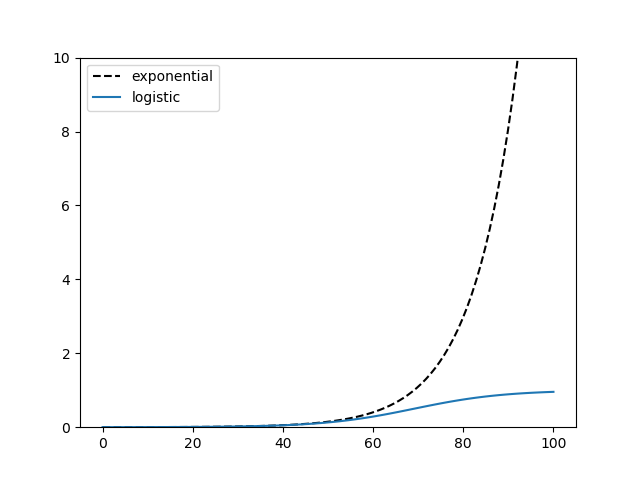 [1] I recently heard from a friend in Niger that the country only had its first case on March 18, long after much of the world. Unfortunately the disease is spreading rapidly, and I imagine growing approximately exponentially for now. To make matters worse, the Niger is at the bottom of the UN Heath Development Index as of 2018.

[2] Several people asked me from the beginning of the pandemic about mathematical models. I said that there would be many mathematical models, all over-simplified. I have not created or endorsed any model because I am not an epidemiologist. I have limited my comments to saying that epidemics are complex and there are a lot of unknowns.