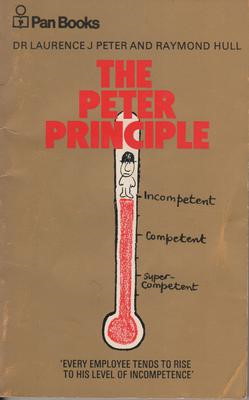 The Peter Principle is an idea that was developed by Lawrence Peter and expanded into a book coauthored with Raymond Hull in 1969. It says that people rise to their level of incompetence. According to the Peter Principle, competent people are repeatedly promoted until they get to a level where they’re not bad enough to fire but not good enough to promote.

I haven’t thought about the Peter Principle in a while, but I was reminded of it when I was reading One Giant Leap and was struck by this line:

He was the opposite of the Peter Principle.

What a great thing to have someone say about you. So what was the context of that line?

Jane Tindall said it about her husband Bill. The title of that chapter in One Giant Leap is “The Man Who Saved Apollo.” The author, Charles Fishman, is saying indirectly that Bill Tindall was the man who saved Apollo by getting the program’s software development effort on track. The previous chapter, “The Fourth Crew Member” explained how Apollo’s guidance computer, primitive as its hardware was by contemporary standards, was absolutely critical to the missions.

Here’s the paragraph containing the line above.

By 1966 Tindall had had years of management experience; one engineer who worked for him said that Tindall liked remaining the deputy in the divisions where he worked because it gave him more actual ability to get things done, more maneuvering room, and considerably less bureaucratic hassle. Said his wife, Jane, “He was the opposite of the Peter Principle.” [1] Tindall had the ability and experience to absorb, understand, and sort out serious technical problems, and that ability earned him the respect of his colleagues, even when they didn’t get the decision they wanted.

[1] No one used the term “Peter Principle” during the Apollo program because Dr. Peter had not yet coined the term yet. The quote from Jane Tindall came from Fishman interviewing her in 2016.

3 thoughts on “Opposite of the Peter Principle”