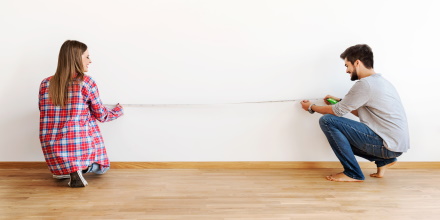 There are a couple ways in which a measurement might not be straight. Yesterday I wrote a blog post about not measuring straight toward your target. You’d like to measure from (0, 0) to (x, 0), but something is in the way, and so you measure from (0, 0) to (x, y), where y is small relative to x. We assumed the tape measure was straight, but didn’t aim straight at the target.

In this post we will consider measuring from (0, y) to (x, y), but with the tape measure sagging to (x/2, 0) in the middle. We end exactly at our target, but the tape bends. As before, we’ll assume y is small relative to x. About how large will our error be as a function of y?

Since we are assuming the amount of sag y is small relative to the horizontal distance x, a parabola will do just as well as a catenary. (More on how well a parabola approximates a catenary here.)

The equation of the parabola passing through our three specified points, as a function of t, is

Even with our simplifying assumption that the tape bends like a parabola, the arclength calculation is still a little tedious, but if I’ve done things correctly the result turns out to be

I inadvertently ended up writing three blog posts in a row related to measuring tapes. Here are the other two:

4 thoughts on “How much does it matter if the measuring tape sags?”