and so the possibilities explode as n increases. We could do n = 3 and 4, but 5 would be a lot of work, and 6 is out of the question.

So we do what we always do when a space is too big to explore exhaustively: we explore at random.

We can generate a subset of these numbers by generating a random mask consisting of 0s and 1s, and keeping the numbers where the mask value is 1. We could do this with code like the following.

There’s a small problem with this approach: the set ones always contains 0. We want it to contain 0 if and only if the 0th mask value is a 1.

The following code generates a Boolean expression on n variables, simplifies it, and returns the length of the simplified expression [1].

We can create several random samples and make a histogram with the following code.

The data in the following graph comes from calling histogram(5, 1000). 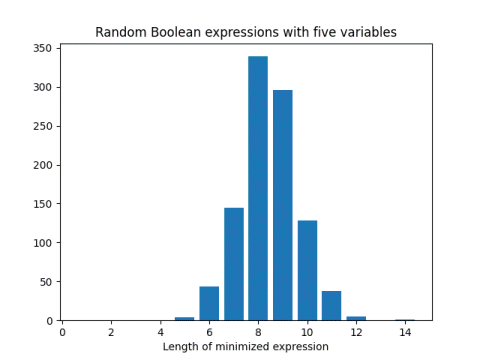 The code is slow because the Quine-McCluskey algorithm is slow, and our Python implementation of the algorithm isn’t as fast as it could be. But Boolean minimization is an NP problem, so no exact algorithm is going to scale well. To get faster results, we could switch to something like the Expresso Heuristic Logic Minimizer, which often gets close to a minimum expression.

[1] The code above will fail if the set of terms where the function is 1 is empty. However this is extremely unlikely: we’d expect it to happen once in every 2^(2^n) times and so when n = 5 this is less than one time in four billion. The fully correct approach would be to call qm with zeros=x when ones is empty.