The previous post Does chaos imply period 3? ended with looking at a couple cubic polynomials whose roots have period 3 under the mapping f(x) = 4x(1-x). These are

I ended the post by saying you could find their roots numerically using the NSolve function in Mathematica.

If you apply ToRadicals to the roots, Mathematica will give you the roots in radical form, with expressions involving complex numbers. For example, here’s the smallest root of the first polynomial:

But the roots of these polynomials are clearly real as you can see from their graphs.

If we didn’t have access to a graph, we could show that the roots are real and distinct by computing the discriminant and seeing that it is positive.

This says there’s a sort of excluded middle ground: the roots cannot involve cubic roots with real numbers. They are either simpler or more complex. If there is a rational root, you can factor it out and find the other two roots with the quadratic equation, i.e. only using square roots, not cubic roots. But if there is no rational root, expressing the roots in terms of radicals requires cube roots and complex numbers.

any rational root must have denominator 1, 2, 4, …, 64 and numerator either 1 or 7. We can check all the possibilities and see that none of them are zeros.

Similarly the only possible rational roots of

So the roots of our cubic polynomials can be expressed in terms of radicals, but not without complex numbers, even though the roots are all real.

The reason we were interested in these two polynomials is that we were looking for orbits of period 3 under iterations of 4x(1-x). And we found them. But they form an unstable orbit.

If we make a cobweb plot of the iterations starting at any one of the roots, it appears that multiple applications of 4x(1-x) just rotate between the three roots. 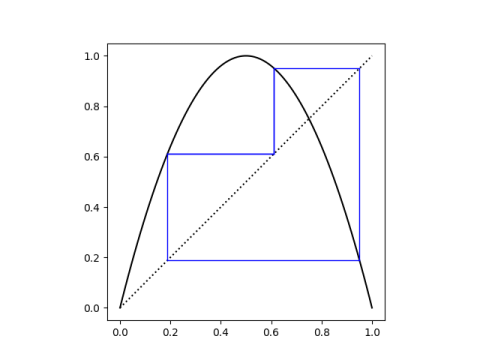 But with a few more iterations—the plot below shows 100 iterations—we can see that these points are not stable. Unless you start exactly on one of the roots, which you cannot since they’re irrational, you will wander away from them. 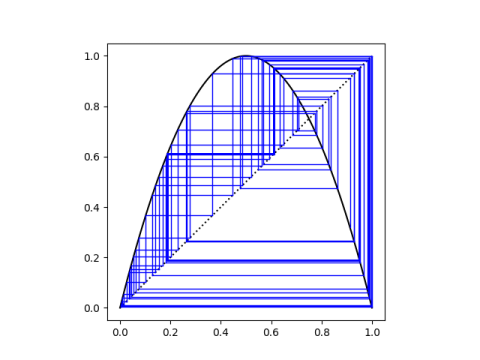