is commonly used as an example to disprove a couple things students might be lead to believe. This post will show how the logistic function

could be used in the same contexts. This shows that f(x) is not an isolated example, and the phenomena that it illustrates are not so rare.

The logistic function g also has a finite radius of convergence, even though the function is smooth everywhere along the real line. It has a singularity in the complex plane when exp(x) = -1, which happens at odd multiples of πi. So the power series for g centered at 0 has a radius of π, because that’s the distance from 0 to the nearest singularity of g.

Carl David Tolmé Runge, best known for the Runge-Kutta algorithm, discovered that interpolating a function at more points may give worse results. In fact, the maximum interpolation error can go to infinity as the number of interpolation points increases. This is true for the Cauchy function f above, but also for the logistic function g. As before, the explanation lies in the complex plane.

Runge’s proved that trouble occurs when interpolating over the segment [-1, 1] at evenly-spaced points [2] if the function being interpolated has a singularity inside a certain region in the complex plane. See [3] for details.When we interpolate

we can see the Runge phenomenon if a is large enough and if we interpolate at enough points. In the Mathematica code below, we use a = 10 and interpolate at 22 points. 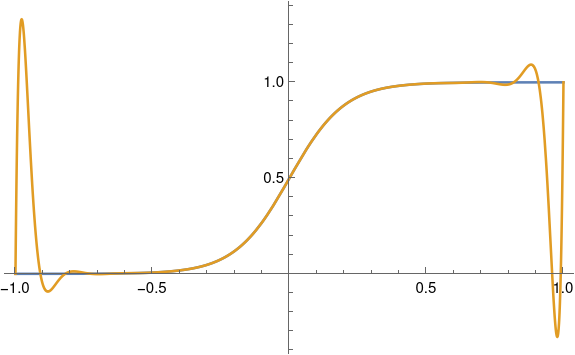 Note that we get a good fit over much of the interval; the two curves agree to within the thickness of a plotting line. But we get huge error near the ends. There we can see the flat blue line sticking out.

This and the equation

are both abuses of notation with a common explanation. In both cases, you start with a power series for a function that is valid in some limited region. The left side of the equation evaluates that series where the series does not converge, and the right side of the equation evaluates an analytic continuation of the function at that same point. In the first example, the function is the Riemann zeta function ζ(s) which is defined by

[2] You can avoid the problem by not using evenly spaced points, e.g. by using Chebyshev interpolation.