This post will approximate of the tail probability of a gamma random variable using the heuristic given in the previous post.

This distribution has mean and variance a, and mode a-1.

We’re interested in approximating the integral above for moderately large x relative to a.

This equation would have to be solved numerically, but lets try something very simple first and see how it works. Let’s assume the ta-1 term doesn’t change as much as the the exp(-t) term between x and x + 1. This says an approximate solution to our equation for t is simply

In other words, the CDF is approximately the PDF. That’s all nice and simple, but how good is it? Here’s a plot for a = 5. 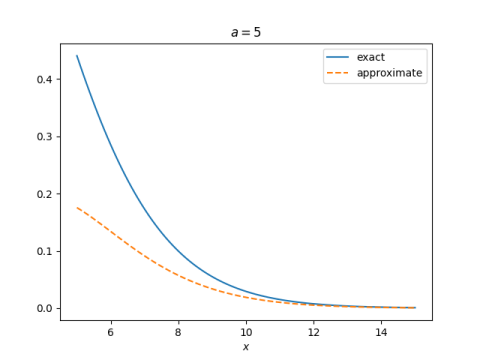 We were kinda sloppy in solving for t above. Would it help if we had a more accurate value of t? No, that doesn’t make much difference, and it actually makes things a little worse. The important issue is to identify over what range of a and x the approximation works well.

So if we truncate the portion inside the parentheses to just 1, we have the approximation above. The approximation error from truncating an asymptotic series is approximately the first term that was left out.

Here’s a contour plot of the absolute error: 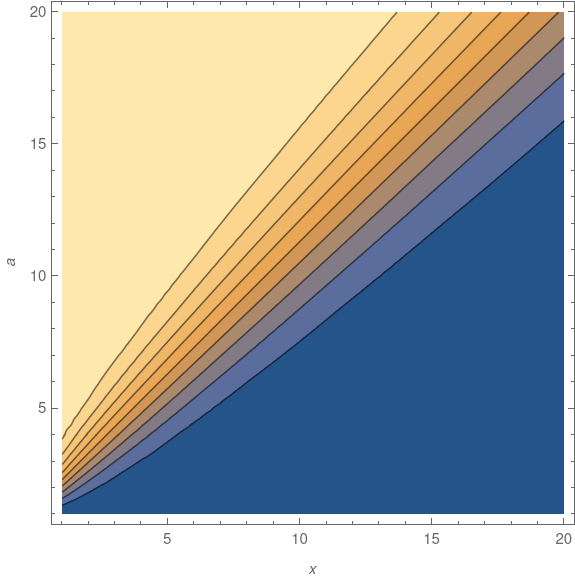 The deep blue area below the diagonal of the graph shows the error is smallest when x > a. In 3D, the plot has a high plateau in the top left and a valley in the lower right, with a rapid transition between the two, suggested by the density of contour lines near the diagonal.

In the previous post I said that the next post would give an example where the 1/e heuristic doesn’t work well. This post has done that. It’s also given an example when the heuristic works very well. Both are the same example but with different parameters. When x >> a the method works well, and the bigger x is relative to a, the better it works.