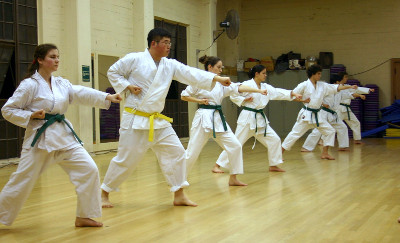 But literal katas are choreographed. They are rituals rather than problem-solving exercises. There may be an element of problem solving, such as figuring how to better execute the prescribed movements, but katas are rehearsal rather than improvisation.

CodeKata.com brings up the analogy to musical practice in the opening paragraph of the home page. But musical practice is also more ritual than problem-solving, at least for classical music. A musician might go through major and minor scales in all 12 keys, then maybe a chromatic scale over the range of the instrument, then two different whole-tone scales, etc.

A code kata would be more like a jazz musician improvising a different melody to the same chord changes every day. (Richie Cole would show off by improvising over the chord changes to Cherokee in all twelve keys. I don’t know whether this was a ritual for him or something he would pull out for performances.)

This brings up a couple questions. What would a more literal analog of katas look like for programming? Would these be useful?

I could imagine someone going through a prescribed sequence of keystrokes that exercise a set of software features that they wanted to keep top of mind, sorta like practicing penmanship by writing out a pangram.

This is admittedly a kind of an odd idea. It makes sense that the kinds of exercises programmers are interested in require problem solving rather than recall. But maybe it would appeal to some people.

Image “karate training” by Genista is licensed under CC BY-SA 2.0 .