It’s a curious and convenient fact that many decibel values are close to integers [1]: 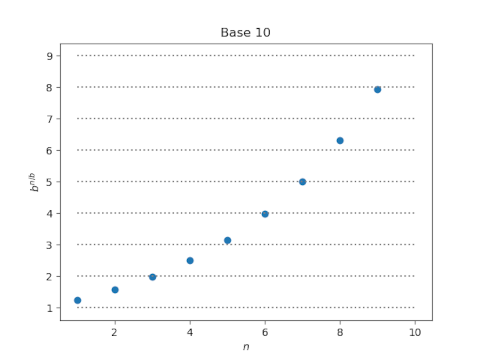 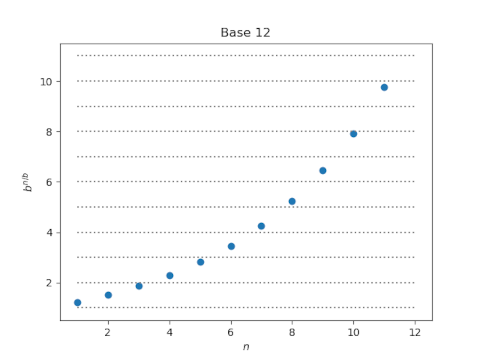 This comparison is informative, but it’s arbitrary because it depends on our plotting parameters. It would be better to count how many values come within ε of an integer, though that would still be somewhat arbitrary because it would depend on a choice of ε. A more objective measure would be to compute the average distance of each value of g(n, b) to the nearest integer [2].

Here’s a plot of the mean distance from generalized decibel values to the nearest integer as a function of the base b. 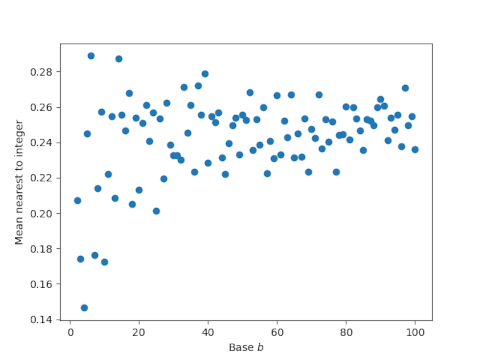 As the base gets larger, the dots seem to vary around 0.25. This is what we’d expect if the fractional parts were randomly distributed. 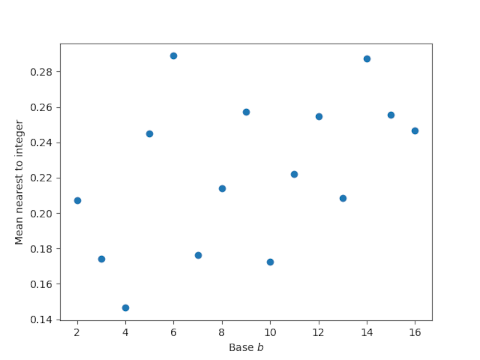 So is base 10 special? It is in this sense: it has the smallest mean distance from generalized decibel values to integers for any integer base b with b > 4.

Incidentally, if we go back to counting near integers and choose ε between 0.02 and 0.17, then base 10 has the largest proportion of near integer decibel values.

I only looked at mean distances to integers for bases up to 10,000 because I was working in Python and going further than that would be slow. I rewrote by program in C [3] and looked at bases up to 1,000,000. The two curves below give lower and upper bounds on the variation in mean distances. At each point b, the upper curve is the maximum from b to the 1,000,000 and the lower curve is the corresponding minimum. (This might remind you of lim sup and lim inf.) Note that the scale on the horizontal axis is logarithmic. 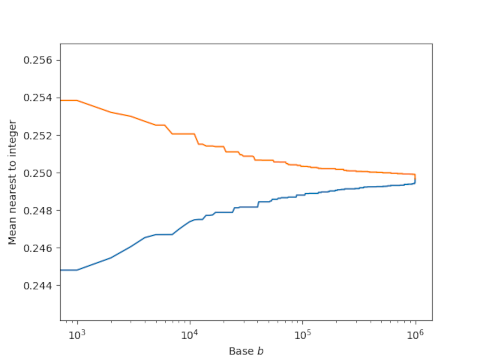 [1] It’s also convenient that the values that are not close to integers are close fractions involving small powers of 2 and 5. More on that here.

[2] This is borrowing an idea from compressive sensing and other areas, using the L1 norm as a proxy for sparsity. It’s awkward to count how many entries in a vector are “near zero” but easier to look at the L1 norm.

[3] There are ways to make Python code run faster, but my personal rule is to not spend much time optimizing Python. I’ll try a few things, but then if that doesn’t work I rewrite things in C. Especially if it’s a small amount of code, rewriting in C is easier and more reliable, at least for me. YMMV.