I was spelunking around in Unicode and found that there are assigned characters for representing domino tiles and that the characters are enumerated in a convenient order. Here is the code chart.

The following tiny Python function gives the codepoint for the domino with a spots on the left (or top) and b spots on the right (or bottom).

To my surprise, my computer had the fonts installed to display the results. This isn’t guaranteed for such high Unicode values. 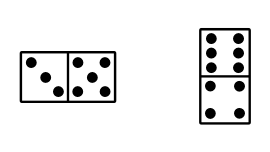