I figured out something that I wasn’t able to find by searching, so I’m posting it here in case other people have the same question and the same difficulty finding an answer.

Japanese kana consists of two syllabaries, hiragana and katakana, that are like phonetic alphabets. Each has 46 basic characters, and each corresponds to a block of 96 Unicode characters. I had two simple questions:

I’ll start with the second question because it’s easier. Hiragana and katakana are different ways of representing the same sounds, and they correspond one to one. For example, the full name of U+3047 (ぇ) is

The only difference as far as Unicode goes is that katakana has three code points whose hiragana counterpart is unused, but these are not part of the basic letters.

The following Python code shows that the names of all the characters are the same except for the name of the system.

You’ll see kana written in grid with one side labeled with 5 vowels and the other labeled with 10 consonants called a gojūon (五十音). That’s 50 cells, and in fact gojūon literally means 50 sounds, so how do we get 46? Five cells are empty, and one letter doesn’t fit into the grid. The empty cells are unused or archaic, and the extra character doesn’t fit the grid structure. 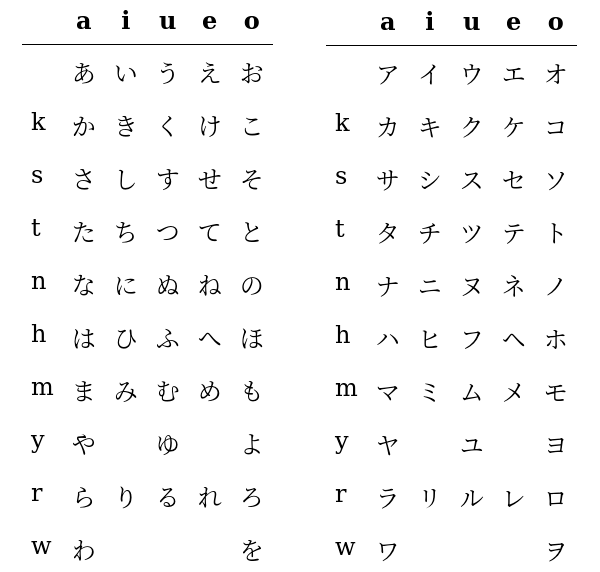 Left out of each table is ん in hiragana and ン in katakana.

So does each set of 46 characters map into its Unicode code block?

Unicode numbers the letters consecutively if you traverse the grid increasing vowels first, then consonants, and adding the straggler at the end. But the reason 46 letters expand into more code points is that each letter can have one, two, or three variations. And there are various miscellaneous other symbols in the Unicode block.

Here is how hiragana maps into Unicode. Each cell should be U+3000 plus the characters show.

The corresponding table for katakana is the previous table plus 0x60:

In each case, the letter missing from the table is the next consecutive value after the last in the table, i.e. ン is U+30F3.