Geoff Lindsey contacted me recently to ask whether he could use the sheet music from one of my blog posts in a video he was making on Morse code snippets hidden in music. The sheet music appears about a minute into the video. 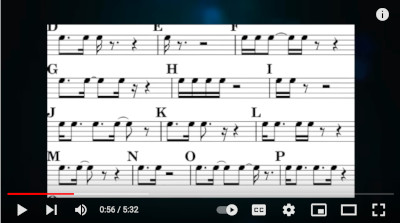 After watching the video, his previious video played, a video about words hidden in music. The title of a movie or television show is often hidden in the theme song, even if the theme has no lyrics.

For example, the theme song to Murder on the Orient Express is based on the rhythm of the title. The title sequence makes this clear because the syllables of the title appear in rhythm with the music. Sometimes the effect is less obvious or even debatable, such as in Jurassic Park or Harry Potter.

One thought on “Hidden messages in music”