Maybe this has been done before, but I haven’t seen it: Morse code in musical notation.

Here’s the Morse code alphabet, one letter per measure; in practice there would be less space between letters [1]. A dash is supposed to be three times as long as a dot, so a dot is a sixteenth note and a dash is a dotted eighth note. 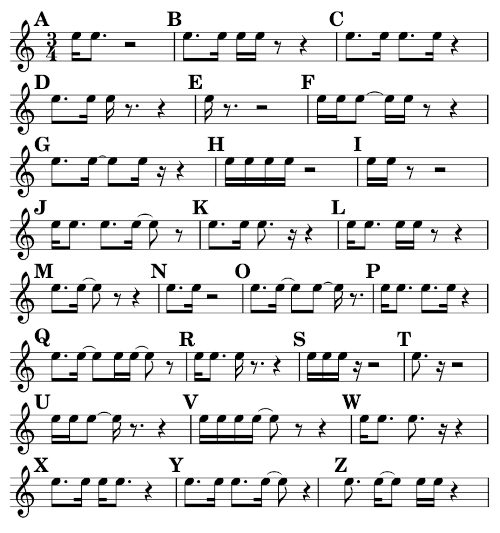 Officially a dash is three times as long as a dot. But there’s also a space equal to the length of a dot between parts of a letter. So the sheet music above would be more accurate if you imagined all the sixteenth notes are staccato and the dotted eighth notes are really eighth notes followed by a sixteenth rest.

This doesn’t make much difference because individual operators have varying “fists,” styles of sending Morse code, and won’t exactly follow the official length and spacing rules.

You could rewrite the music above as follows, but it’s all an approximation.

That would imply that copying Morse code at 20 wpm is pushing the limits of human hearing. But copying at 20 wpm is common. Some people can copy Morse code at more than 50 words per minute or more, but at that speed they’re not hearing individual dits and dahs. An H, for example, four dits in a row, sounds like a single rough sound. In fact, they’re not really hearing letters at all but recognizing the shape of words.

How the image was made

I made the image above with LaTeX and Lilypond.

Adding the letters above each measure was kind of a hack. I used rehearsal markings to label the measures, but there was one problem: the software skips from letter H to letter J. That meant that the labels I and all subsequent letters were one ahead of what they should be, and the final letter Z was labeled AA. I tried several tricks, and Lilypond steadfastly refused to label a measure with ‘I’ even though I’ve seen such a label in the documentation.

My way around this was to make it label two consecutive measures with H, then in image editing software I turned the second H into an I. No doubt there’s a better way, but this worked.

I may play around with this and try to improve it a bit. If you have any suggestions, particularly related to Lilypond, please let me know.

[1] You could think of the musical score above as a sort of transcription of the Farnsworth method of teaching Morse code. Students learn the letters at full speed, but with extra space between the letters at first. The faster speed discourages consciously counting the dits and dahs, forcing the student to listen to the overall rhythm of the letters.