In my previous post, I discussed how number theory and topology relate to other areas of math. Part of that was to show a couple diagrams from  Jean Dieudonné’s book Panorama of Pure Mathematics, as seen by N. Bourbaki. That book has only small star-shaped diagrams considering one area of math at a time. I’ve created a diagram that pastes these local views into one grand diagram. Along the way I’ve done a little editing because the original diagrams were not entirely consistent.

Here’s a condensed view of the graph. You can find the full image here. 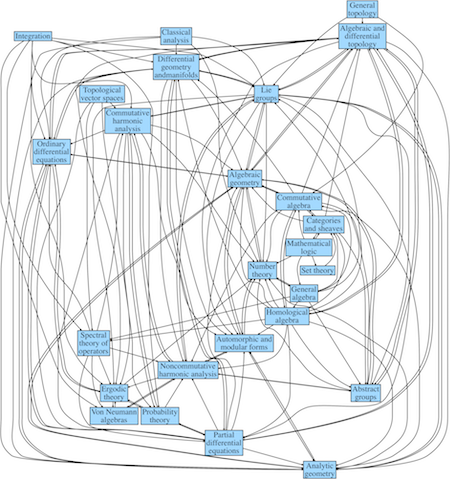 The graph is so dense that it’s hard to tell which areas have the most or least connections. Here are some tables to clarify that. First, counting how many areas an particular area contributes to, i.e. number of outgoing arrows.

Next, counting the sources each area draws on, i.e. counting incoming arrows.

There are some real quirks here. The most foundational areas get short shrift. Set theory contributes to only one area of math?! Topological vector spaces don’t depend on anything, not even topology?!

I suspect Dieudonné had in mind fairly high-level contributions. Topological vector spaces, for example, obviously depend on topology, but not deeply. You could do research in the area while seldom drawing on more than an introductory topology course. Elementary logic and set theory are used everywhere, but most mathematicians have no need for advanced logic or set theory.

8 thoughts on “How areas of math are connected”