This post assumes you’ve read the previous post that explains what Benford’s law is and looks at how well samples from a Weibull distribution follow that law.

This post has two purposes. First, we show that samples from a Cauchy distribution approximately follow Benford’s law. Second, we look at problems with testing goodness of fit with NHST.

We can reuse the code from the previous post to test Cauchy samples, with one modification. Cauchy samples can be negative, so we have to modify our leading_digit function to take an absolute value.

We’ll also need to import cauchy from scipy.stats and change where we draw samples to use this distribution.

Here’s how a sample of 1000 Cauchy values compared to the prediction of Benford’s law:

Here’s a bar graph of the same data. 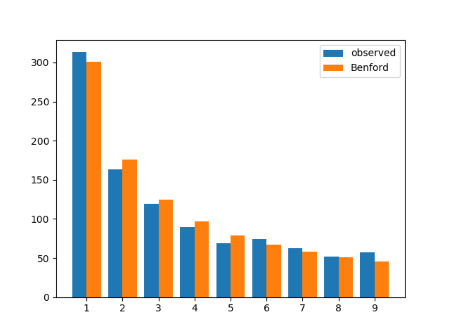 Here’s how our chi-square values and p-values vary with sample size.

The p-values eventually get very small, but they don’t decrease monotonically with sample size. This is to be expected. If the data came from a Benford distribution, i.e. if the null hypothesis were true, we’d expect the p-values to be uniformly distributed, i.e. they’d be equally likely to take on any value between 0 and 1. And not until the two largest samples do we see values that don’t look consistent with uniform samples from [0, 1].

2 thoughts on “Cauchy, Benford, and a problem with NHST”