Sir Michael Atiyah recommends Hermann Weyl’s book The Classical Groups for its clarity and beautiful prose. From my interview with Atiyah:

Hermann Weyl is my great model. He used to write beautiful literature. Reading it was a joy because he put a lot of thought into it. Hermann Weyl wrote a book called The Classical Groups, very famous book, and at the same time a book appeared by Chevalley called Lie Groups. Chevalley’s book was compact, all the theorems are there, very precise, Bourbaki-style definitions. If you want to learn about it, it’s all there. Hermann Weyl’s book was the other way around. It is discursive, expansive, it’s a bigger book, it tells you much more than need to know. It’s the kind of book you read ten times. Chevalley’s book you read once. …

In the introduction he explains that he’s German, he’s writing in a foreign language, he apologizes saying he is writing in a language that was “not sung by the gods at my cradle.” You can’t get any more poetic than that. I’m a great admirer of his style, of his exposition and his mathematics. They go together.

Here’s the portion of the preface that Atiyah is quoting, where Weyl apologies eloquently for his lack of eloquence in writing English.

The gods have imposed upon my writing the yoke of a foreign tongue that was not sung at my cradle.

I am tempted to say with Gottfried Keller. Nobody is more aware than myself of the attendant loss of vigor, ease and lucidity of expression. 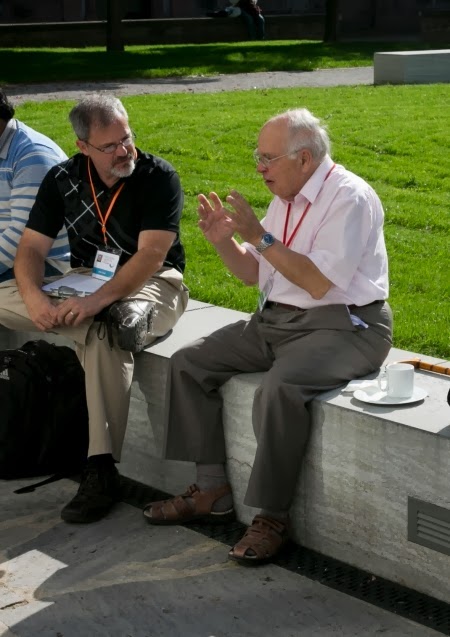 Photographer Bernhard Kreutzer came by while I was interviewing Atiyah at the first Heidelberg Laureate Forum in 2013.