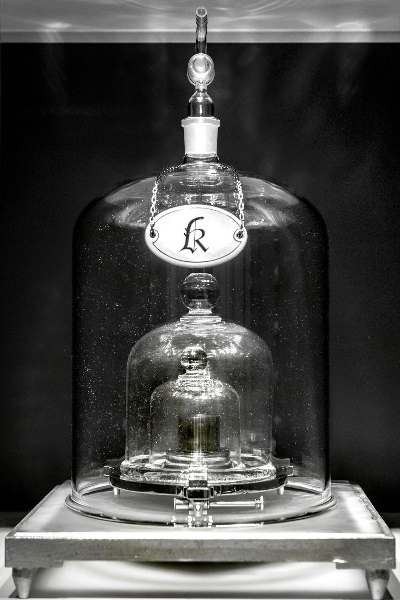 The General Conference on Weights and Measures voted today to redefine the kilogram. The official definition no longer refers to the mass of the International Prototype of the Kilogram (IPK) stored at the BIPM (Bureau International des Poids et Measures) in France. The Coulomb, kelvin, and mole have also been redefined.

Until now, Planck’s constant had been measured to be

Now this is the exact value of Planck’s constant by definition, implicitly defining the kilogram.

The other SI units were already defined in terms of fundamental physical phenomena. The second is defined as

the duration of 9,192,631,770 periods of the radiation corresponding to the transition between the two hyperfine levels of the ground state of the cesium-133 atom

and the statement that the speed of light is

So now the physics of cesium-133 defines the second, the speed of light defines the meter, and Planck’s constant defines the kilogram. There are no more SI units defined by physical objects.

The elementary charge had been measured as

and now this equation is exact by definition, defining the coulomb in terms of the elementary charge. And since the ampere is defined as flow of one Coulomb per second, this also changes the definition of the ampere.

The kelvin unit of temperature is now defined in terms of the Boltzmann constant, again reversing the role of measurement and definition. Now the expression

for the Boltzmann constant is exact by definition, defining K.

Incidentally, when I first started my Twitter account @UnitFact for units of measure, I used the standard kilogram as the icon.

Then some time later I changed the icon to a Greek mu, the symbol for “micro” used with many units.

The icon for @ScienceTip, however, is Planck’s constant!

It would have been cool if I had anticipated the redefinition of the kilogram and replaced my kilogram icon with the Plank constant icon. (Actually, it’s not Planck’s constant h but the “reduced Planck constant” h-bar equal to h/2π.)

[1] The meter was originally defined in 1791 to be one ten-millionth of the distance from the equator to the North Pole. In 1889, it was redefined to be the distance between two marks on a metal bar stored at BIPM. In 1960 the meter was defined in terms of the spectrum of krypton-86, the first definition that did not depend on an object kept in a vault. In 1983 the definition changed to the one above, making the speed of light exact.

The second was defined in terms of the motion of the earth until 1967 when the definition in terms of cesium-133 was adopted.

5 thoughts on “Kilogram redefined in terms of Planck constant”