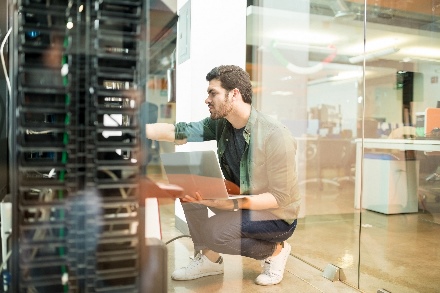 Deep learning has spurred interest in novel floating point formats. Algorithms often don’t need as much precision as standard IEEE-754 doubles or even single precision floats. Lower precision makes it possible to hold more numbers in memory, reducing the time spent swapping numbers in and out of memory. Also, low-precision circuits are far less complex. Together these can benefits can give significant speedup.

Here I want to look at bfloat16, or BF16 for short, and compare it to 16-bit number formats I’ve written about previously, IEEE and posit. BF16 is becoming a de facto standard for deep learning. It is supported by several deep learning accelerators (such as Google’s TPU), and will be supported in Intel processors two generations from now.

BF16 has 16 bits like FP16, but has the same number of exponent bits as FP32. Each number has 1 sign bit. The rest of the bits in each of the formats are allocated as in the table below.

This makes conversion between FP32 and BF16 simple. To go from FP32 to BF16, just cut off the last 16 bits. To got up from BF16 to FP32, pad with zeros, except for some edge cases regarding denormalized numbers.

The epsilon value, the smallest number ε such that 1 + ε > 1 in machine representation, is 2–e where e is the number of fraction bits. BF16 has much less precision near 1 than the other formats.

The dynamic range of bfloat16 is similar to that of a IEEE single precision number. Relative to FP32, BF16 sacrifices precision to retain range. Range is mostly determined by the number of exponent bits, though not entirely.

Dynamic range in decades is the log base 10 of the ratio of the largest to smallest representable positive numbers. The dynamic ranges of the numeric formats are given below. (Python code to calculate dynamic range is given here.)

The precision and dynamic range of posit numbers depends on how many bits you allocate to the maximum exponent, denoted es by convention. (Note “maximum.” The number of exponent bits varies for different numbers.) This post explains the anatomy of a posit number.

which is derived here. The dynamic range and epsilon values for 16-bit posits with es ranging from 1 to 4 are given in the table below.