It occurred to me for the first time this morning that the words liminal and subliminal must be related, just after reading an article by Vicki Boykis that discusses liminal spaces.

I hear the two words in such in different contexts—architecture versus psychology—and hadn’t thought about the connection until now. If I were playing a word association game, my responses would be these.

I checked Etymonline to verify that the two words are indeed cognate. Both come from the Latin word limen for threshold. Something is subliminal if it is below the threshold, typically the threshold of consciousness.

Surely the word subliminal is far more common than liminal. To verify this, I turned to Google’s Ngram Viewer. I’ve included a screenshot below, and you can find the original here. 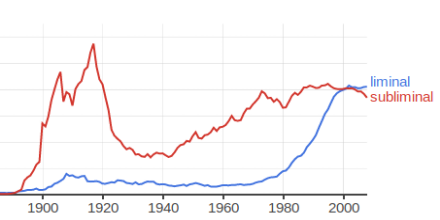 It’s not surprising that subliminal was a popular term during the career of Sigmund Freud. He published The Interpretation of Dreams in 1899 and died in 1939.

What is surprising, at least to me, is that the word liminal has been gaining popularity and passed subliminal around the turn of the century. I didn’t expect liminal to be anywhere near as common as subliminal.

Google’s Ngram data comes from books. Word frequencies in books can be very different than word frequencies in common speech or other writing as this example shows. I can’t recall ever hearing someone use liminal in conversation. Maybe civil engineers and architects hear it all the time. As I type this, my spell checker puts a red squiggly line under every instance of liminal, showing that the word is not in its default dictionary, though it does recognize subliminal.

9 thoughts on “Liminal and subliminal”