A couple weeks ago I wrote about how De Bruijn sequences can be used to attack locks where there is no “enter” key, i.e. the lock will open once the right symbols have been entered.

Here’s a variation on this theme: what about locks that let you press more than one button at a time? [1] 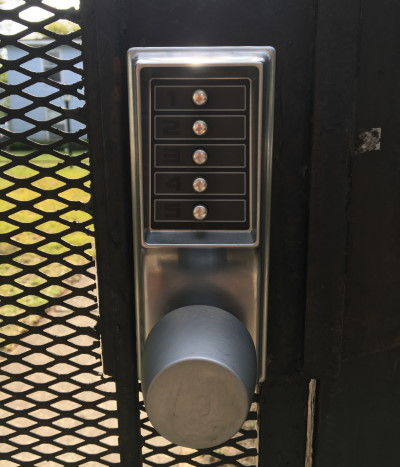 You could just treat this as if it were a keypad with more buttons. For example, suppose you can push either one or two buttons at a time on the lock pictured above. Then you could treat this as a lock with 15 buttons: the five actual buttons and 10 virtual buttons corresponding to the ten ways you could choose 2 buttons out of 5 to press at the same time.

Maybe a lock would let you press even more buttons at once. I don’t think I’ve ever used a combination that required more than two buttons at once, but in principle you could push up to five buttons at once in the photo above, for a total of 31 possible button combinations. And since 31 is prime, you could use the algorithm here to generate the corresponding De Bruijn sequence.

But what if you’ve tried a B(k, 4) sequence and it turns out the password has length 5? You could do better than starting over with a B(k, 5) sequence, because some of the substrings in that B(k, 5) sequence will have already been tried. But how could you do this systematically? If you don’t know the length of the password, how could you do better than trying B(k, 1), then B(k, 2), then B(k, 3) etc.?

[1] For this post, I’m assuming the lock will open as soon as you enter the right sequence of buttons. For example, if the pass code is 345 and you enter 12345 the lock will open. I don’t know whether these locks work that way. Maybe you have to turn the handle, which would effectively act as an enter key. But maybe there’s a way to listen to the lock so that you’ll know when the combination has been entered, before you twist the handle.

Update: According to the first comment below, locks of the kind featured in the photo only allow each button to be used once. That puts severe limits on the number of possible combinations, and the approach outlined here would be unnecessary. However, the post brings up more general questions that could be useful in another setting.

One thought on “More on attacking combination locks”