Alex Kontorovich had an interesting tweet about the Riemann hypothesis a few days ago.

Why is the Riemann Hypothesis hard? Just one reason (of very many): it’s not an analytic question. Here are the values of zeta on the 1/2-line (where at least 40% of the zeros are, all should be) and the 4/5-line, where none should be. The latter gets arbitrarily close to 0, i.o. pic.twitter.com/qSHhwwCY6X

The critical strip of the Riemann zeta function is the portion of the complex plane with real part between 0 and 1. The Riemann hypothesis conjectures that the zeros of the zeta function in this region all have real part 1/2. To put it another way, the Riemann hypothesis says that ζ(x + it) is never zero unless x = 1/2. However, according to Alex Kontorovich’s tweet, the function gets arbitrarily close to zero infinitely often for other values of x.

I wrote a little Mathematica code to produce graphs like the ones above. Here is a plot of ζ(1/2 + it). 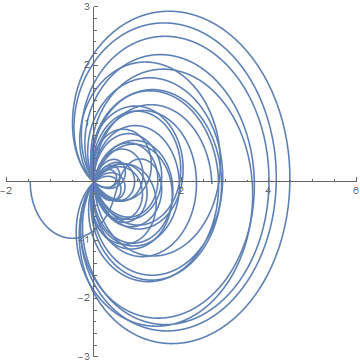 At first I didn’t specify the aspect ratio and I got nearly circular arcs. Then I realized that was an artifact of Mathematica’s default aspect ratio. Also, I set the plot range so the image above would be comparable with the next image.

Notice all the lines crossing the origin. These correspond to the zeros of ζ along the line Re(x) = 1/2. 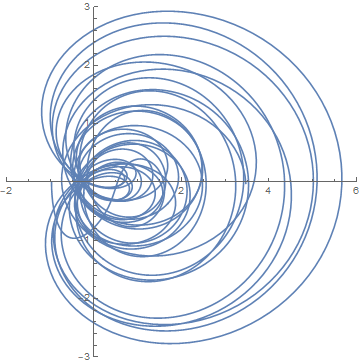 If you look closely you’ll see a gap around the origin.

Here’s a closeup of the origin in both graphs. First for x = 1/2 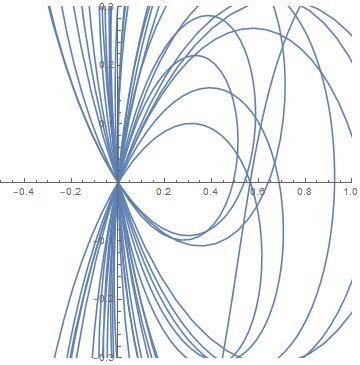 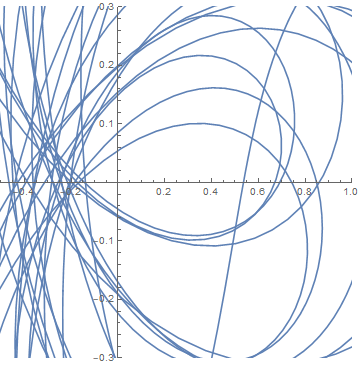 I hadn’t seen the result in Kontorovich’s tweet before. I don’t know whether it holds for all x or just for certain values of x. I assume the former. But apparently it at least holds for x = 4/5. So we should be able to find values of |&zeta(4/5 + it)| as small as we like by taking t large enough, and we should always be able to find more such values by looking further out. In practice, you might have to very far out before you find a small value. Looking as far as 1000, for example, it seems the minimum is about 0.2. 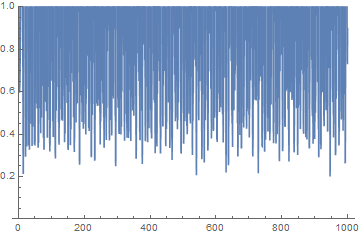 If you ask Mathematica to find the minimum in the graph above, it won’t give a reasonable answer; there are too many local minima. If instead you ask it to look repeatedly over small intervals, it does much better. The following minimizes |ζ(4/5 + it)| over the interval [i, i+1].

It returns a pair: the minimum and where it occurred. The following will look for places where |ζ(4/5 + it)| is less than 0.2.

It finds two such values.

As I write this I have a longer program running, and so far the smallest value I’ve found is 0.1809 which occurs at t = 1329.13. According to Kontorovich you can find as small a value as you like, say less than 0.1 or 0.001, but apparently it might take a very long time.

6 thoughts on “Near zeros of zeta”