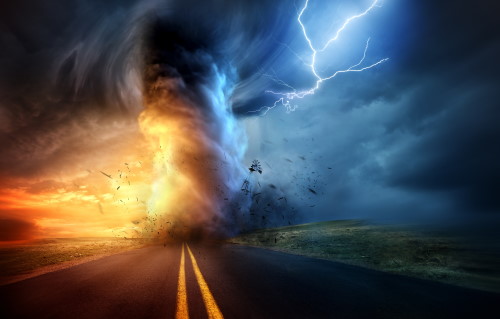 I’ve recently started reading One Giant Leap, a book about the Apollo missions. In a section on nuclear testing, the book describes what was believed to be a connection between weapon tests and tornadoes.

In 1953 and 1954 there were all-time record outbreaks of tornadoes across the US, accompanied by fierce thunderstorms. The belief that the tornadoes were caused by the atomic testing in Nevada was so common among the public that Gallup conducted a poll on the topic, which showed that 29% of Americans thought that A-bombs were causing tornadoes many states away; 20% couldn’t say whether they were or not. Members of Congress required the military to provide data on any connection.

It wasn’t unreasonable at the time to speculate that there could be a connection between nuclear testing and tornadoes. No one knew much about the effects of nuclear explosions or about the causes of tornadoes in 1954. But here’s the part that was preventable:

In fact it turned out there weren’t really more tornadoes in those years; it was just that tornado reporting and tracking had gotten much more effective and thorough.

Once the public got the impression that tornadoes were becoming more frequent, confirmation bias would firm up that impression with each tornado citing.

I imagine someone knew this in 1954. Someone must have looked at the data and said “Hey, wait a minute.” This person was probably ridiculed by the few who even listened.

Update: I found a newspaper article cited in One Giant Leap: “A-Bomb Link to Tornadoes is Discounted,” Washington Post. November 18, 1954. The article quoted D. Lee Harris of the United States Weather Bureau saying “Improvement in tornado reporting is largely responsible for the great increase in total number of the storms reported in recent years.”

The Gallup poll was prior to the article cited. It would be interesting if there had been a follow-up poll to see how much impact Harris’ statement had on public opinion.