The previous post made use of both the arithmetic and geometric means. It also showed how both of these means correspond to different points along a continuum of means. This post combines those ideas.

Let a and b be two positive numbers. Then the arithmetic and geometric means are defined by

The arithmetic mean dominates the geometric mean. That is,

with equality if and only if a = b. So the a‘s converge down to AGM(a, b) and the b‘s converge up to AGM(a, b). The AGM is between the arithmetic and geometric means.

There’s another way to create means between the arithmetic and geometric means, and that is by varying the parameter r in the family of means

We can simplify things a little by assuming one of our arguments is 1. This is because all the means mentioned here are homogeneous, i.e. you can pull out constants.

I looked at AGM(1, x) for x ranging from 1 to 100 and compared it to r-means for varying values of r and found that I got a good fit for r = 0.415. I have no theory behind this, just tinkering. The optimal value depends on how you measure the error, and probably depends on the range of x. 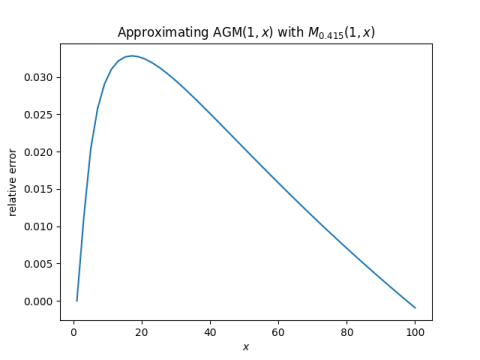 [1] The sequence converges very rapidly. I intended to show a plot, but the convergence is so rapid that it’s hard to plot. If I start with a = 1 and b = 100, then a and b agree to 44 significant figures after just 7 iterations.