The perimeter of an ellipse cannot be computed in closed form. That is, no finite combination of elementary functions will give you the exact value. But we will present a simple approximation that is remarkably accurate.

So this post has two parts: exact calculation, and simple approximation.

If ε is the eccentricity of our ellipse,

and the perimeter is give by

where E is the “complete elliptic integral of the second kind.” This function has popped up several times on this blog, most recently in the post about why serpentine walls save bricks.

You could calculate the perimeter of an ellipse in Python as follows.

But what if you don’t have a scientific library like SciPy at hand? Is there a simple approximation to the perimeter?

In fact there is. In [1] the authors present the approximation

If we define the effective radius as r = p/2π, then the approximation above says

We could code this up in Python as follows.

It would have been less code to write up approx directly without defining rmean, but we’ll use rmean again in the next post. 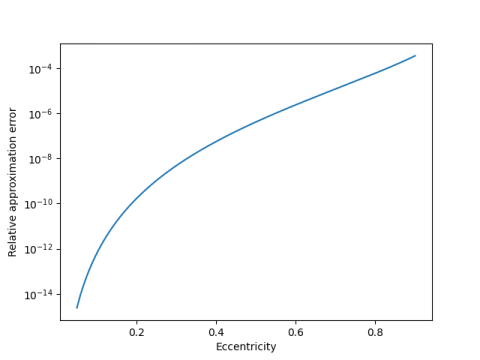 If an ellipse has major axes several times longer than its minor axis, the approximation here is less accurate, but still perhaps good enough, depending on the use. There is an approximation due to Ramanujan that works well even for much more eccentric ellipses, though it’s a little more complicated.

To my mind, the most interesting thing here is the connection to r-norms. I’ll explore that more in the next post, applying r-norms to the surface area of an ellipsoid.

One thought on “Simple approximation for perimeter of an ellipse”