Suppose you need to compare two files with very long lines. Maybe each file is one line.

The diff utility will show you which lines differ. But if the files are each one line, this tells you almost nothing. It confirms that there is a difference, but it doesn’t show you where the difference is. It just dumps both files to the command line.

For example, I created two files each containing the opening paragraph of Moby Dick. The file file1.txt contains the paragraph verbatim, and in file2.txt contains a typo. I ran

and this is what I saw: 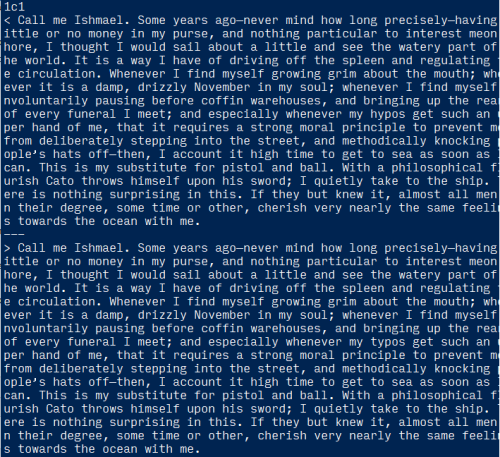 The 1c1 output tells us that the difference occurs on line 1, but that’s no help because the whole file is line 1.

There are no doubt many ways to fix this problem, but the solution I thought of was to use fold to break the files into more lines before running diff. Without any optional arguments, fold will split a file into segments of 80 characters.

That’s better, but we lost context when we chopped the file into 80-character segments. We can’t see that the last words should be “hypos” and “typos”. This is a minor inconvenience, but there’s a bigger problem.

In the example above I simply changed one character, turning an ‘h’ into a ‘t’. But suppose I had changed “hypos” into “typoes”, not only changing a letter, but also inserting a letter. Then the rest of the files would split differently into 80-character segments. Even though the rest of the text is identical, we would be seeing differences created by fold.

This problem can be mitigated by giving diff the option -s, telling it to split lines at word boundaries.

The extra letter that I added changed the way the first line was broken; putting “moral” on the first line of the second output would have made the line 81 characters long. But other than pushing “moral” to the next line, the rest of chopped lines are the same.

You can use the -w option to have diff split lines of lengths other than 80 characters. If I split the files into lines 20 characters long, the differences between the two files are more obvious.

Not only do shorter lines make it easier to see where the differences are, in this case changing the segment length fixed the problem of a word being pushed to the next line. That won’t always be the case. It would not have been the case, for example, if I had used 15-character lines. But you can always change the number of characters slightly to eliminate the problem if you’d like.