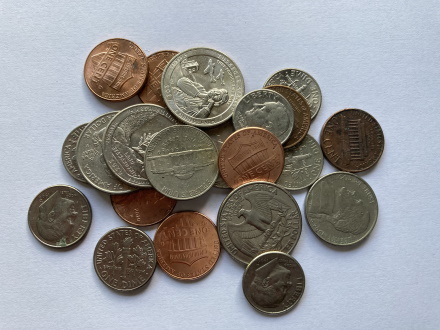 What is the distribution of coins you’d expect to see in a coin jar? This post will make a guess based on the following simplifying assumptions.

Each of these assumptions is basically accurate, though you could find exceptions to each [1]. It would be interesting to compare the results here to an empirical survey of actual coin jars.

What distribution of coins would you expect given these assumptions?

Exercise: Give an example of a coin system in which the analogous algorithm does not give the fewest number of coins. Why does it work for US coin denominations?

[1] An actual coin jar is likely to contain these coins, plus an assortment of pesos, buttons, arcade tokens, etc.  Prices before adding sales tax may not be so uniform, with a bias toward prices ending in multiples of 5, and more prices ending in 95 than in 5, but adding sales tax makes the distribution more uniform. Clerks may not give out optimal change because they may be out of one kind of coin. And of course some people spend their change, and may have a bias toward spending some coins over others.