Twitter does not directly provide support for formatting text in bold, italic, etc. But it does support Unicode characters [1], and so a hack to get around the formatting limitation is to replace letters with Unicode variants.

How to include bold or italic text in a tweet.

I cheated in the line above, using bold and italic formatting rather than Unicode characters because some readers might not be able to read it.

Here’s a screenshot of the actual Unicode text in Emacs. You can see the text in the footnotes [2]. 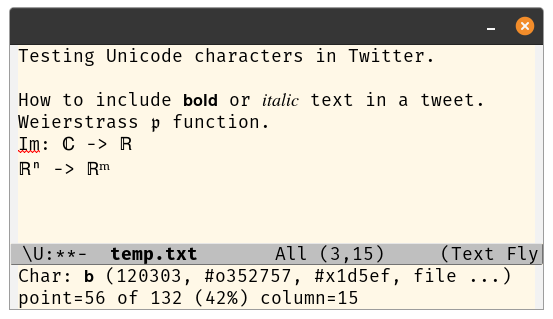 This is plain text. I have asked for the details on the ‘b’ in bold, and the bottom windows shows that it is not the common U+0062 for ‘b’ down in the ASCII range, but U+1D5EF up in the Supplementary Multilingual Plane. Similarly, the i in italic above is not U+0069 but U+1D456.

It’s a dirty hack, and I’d recommend not overdoing it. But it could come in handy occasionally. On the other hand, some people may not see what you intend them to see. Here’s a portion of a screenshot from an Android device:

As a very rough rule of thumb, characters with smaller Unicode values are more likely to display correctly everywhere. Math symbols like ∞ (U+221E) work everywhere as far as I know. I wouldn’t depend on any Unicode character above 0xFFFF.

Update: Several people have said this formatting poses a problem for speech readers. The next post explains why it shouldn’t. (Maybe it does cause a problem, but it wouldn’t have to.)

How to produce Unicode formatting

I produced the Unicode text above using the programs unifont and unisupers from the Perl module Unicode::Tussle. See this post for how to install the module. Here’s a screenshot of using these utilities from the command line. 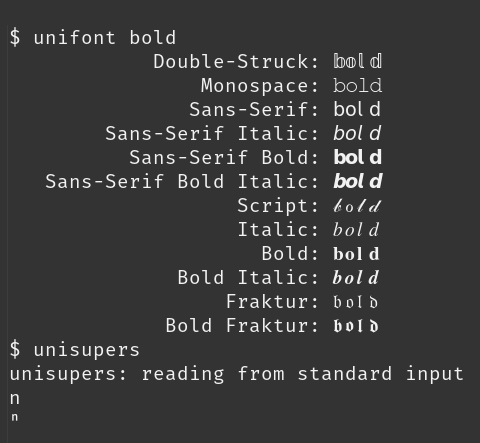 To use unifont, type the text you’d like to format after the command. It then shows the text formatted several ways using Unicode characters. I typed “bold” and copied the bold version of the word. The text could be anything; it’s a coincidence that I gave it text that was also a format name. For example, I created the double-struck R and C above with the command

The unisupers command does not take an argument but instead takes its input from standard input. So I hit return after the command name and then typed ‘n’ to get the superscript n.

[1] Twitter supports Unicode characters, but there’s a question of whether readers will have fonts installed to display the characters. I wrote eight years ago about some symbols users were and were not likely to see, but my impression is that the situation has improved quite a bit since then.

(I pasted the text into my blogging software, but it looks like it is deleting the words “bold” and “italic.”)