The previous post pointed out the analogy between models for modal logic (i.e. Kripke semantics) and science fiction. Rules for relationships between points in a Kripke model are analogous to rules for interplanetary travel in a fictional universe. This post will expand on this last point.

The following cube shows the relationships between eight different axiom systems for modal logic. Unfortunately, as I’ve written about before, the names of these systems are more historical than mnemonic. 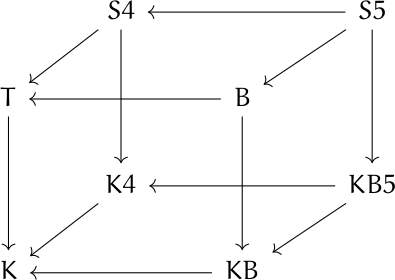 For example, all the systems represent by the cube are “normal,” meaning that they all require Axiom K. So any proposition provable in K is provable in the other systems as well.

Why weaker systems than S5?

The axioms for S5 seem so sensible that you may wonder what the point is in having weaker systems. It all depends on how you interpret the modal qualifier □. In some applications of modal logic, □ has properties that correspond to models with unusual restrictions on accessibility.

We’re not trying to use logic to describe networks, though we could, but rather creating networks to model systems of logic. The resulting networks may have strange geometry if they weren’t motivated by geometry to begin with.

One way to state this is that if a proposition is true, then it is necessarily possibly true.

In words, whatever is possible is necessarily possible. A Kripke model for axiom 5 must be Euclidean: If from world w you can access worlds x and y, then from x you can access y. A relation that is symmetric and transitive is Euclidean. If x is accessible from w, then symmetry says w is accessible from x, and transitivity says you can go on from w to y.

One of the confusing things about modal logic is the complicated relation between the names of axioms and systems of axioms. Sometimes it’s simple. For example, K4 means the system with axioms K and 4.

The vertices of the cube above are systems, not axioms. And system B, confusingly, requires more than axiom B, and is in fact stronger than system KB because it adds axiom T. Chellas [1] calls this system KTB, a more verbose but more transparent name.

Provenance of the cube

The cube at the top of this post is a simplification of similar diagrams that appear in The Standford Encyclopedia of Philosophy and Wikipedia. Both may trace their origin to figure 4.1 in [1]. I don’t know that either diagram came from there, or whether they were developed independently, but [1] predates both. However, the graph in Chellas is less clear. The edge directions are implicit, as is the connection to properties of the models.