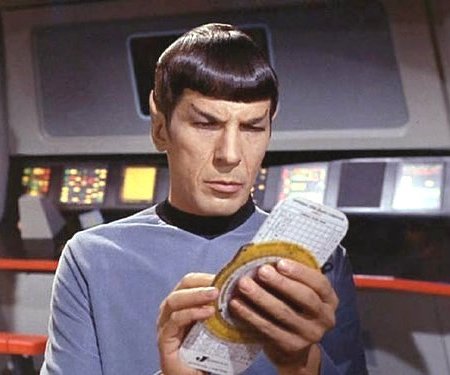 Apparently the prop Mr. Spock is holding is an E6B aircraft slide rule. It includes a circular slide rule and more functionality.

Start with an ordinary straight slide rule, with each bar labeled 1 on the left and 10 on the right end. Now imagine bending this into a circle so that you now have two concentric circles. For x between 1 and 10, the label for x is located at

Suppose you want to multiply x and y, and xy is less than 10, i.e. log10 x + log10 y < 1. Then the multiplication procedure works exactly analogously to how it would have with a straight slide rule. Line up the 1 of the inner ring with the position of x on the outer ring. The position of y on the inner ring lines up with xy on the outer ring because it is at position

which is equal to

and so the y on the inner ring is aligned with the position labeled xy/10. As we noted in the previous post, slide rules only give you the significand (mantissa) of the result, so a slide rule doesn’t know the difference between xy and xy/10. That’s up to you to keep up with.

Update: After first posting this article, I bought an E6B flight computer from Amazon for about $14. I bought the paper version because I’m certainly not going to wear it out. But if you’d like a nicer one, they make the same product in metal.

Here’s a photo of mine: 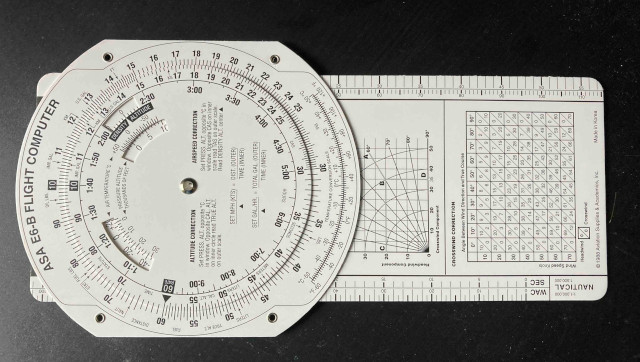 You can slide the horizontal piece out and essentially have a circular slide rule with some extra markings.