I was working on a report for a client this afternoon when I remembered this comic from Spiked Math. 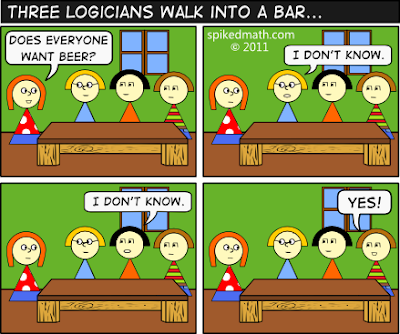 I needed to illustrate the point that revealing information about one person or group can reveal information on other people or other groups. If you give your genetic information to a company, for example, you also give that company (and every entity they share your data with) information about your relatives.

This comic doesn’t illustrate the point I had in mind, but it does illustrate a related point. The third logician didn’t reveal the preferences of the first two, though it looks like that at first. Actually, the first two implicitly reported their own preferences.

One of the Safe Harbor provisions under HIPAA is that data may not contain sparsely populated three-digit zip codes. Sometimes databases will replace sparse zip codes with nulls. But if the same database reports a person’s state, and the state only has one sparse zip code, then the data effectively lists all zip codes. Here the suppressed zip code is conspicuous by its absence. The null value itself didn’t reveal the zip code, nor did the state, but the combination did.

A naive approach to removing sensitive data can be about as effective as bleeping out profanity: it’s not hard to infer what was removed.

One thought on “Conspicuously missing data”