A bump function is a smooth (i.e. infinitely differentiable) function that is positive on some open interval (a, b) and zero outside that interval. I mentioned bump functions a few weeks ago and discussed how they could be used to prevent clicks in radio transmissions.

Today I ran into a twitter thread that gave a more general construction of bump functions that I’d seen before. The thread concludes with this:

You can create bump functions by this recipe:

In this post I’ll give a quick asymptotic proof that the construction above works.

Let a positive integer n be given and define g(x) to be zero for negative x. We’ll show that if f grows faster than xn. then g is n times differentiable at 0.

When I was a student, I would have called this kind of proof hand waving. I’d want to see every inequality made explicit: there exists some M > 0 such that for x > M …. Now I find arguments like the one above easier to follow and more convincing. I imagine if a lecturer gives a proof with all the inequalities spelled out, he or she is probably thinking about something like the proof above and expanding the asymptotic argument on the fly.

This produces the following plot. 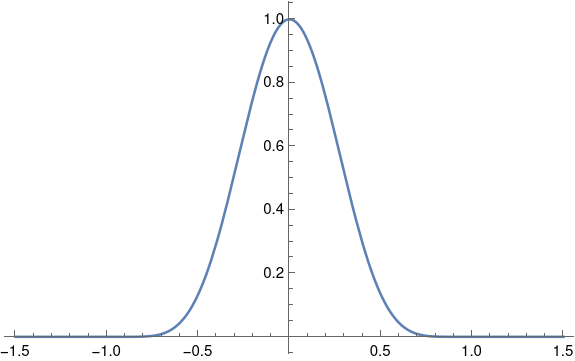 Just looking at the plot, h looks smooth; it’s plausible that it has six derivatives. It appears h is zero outside [-1, 1] and h is positive over at least part of [-1, 1]. If you look at the Mathematica code you can convince yourself that h really is positive on the entire interval open interval (-1, 1), though it is very small as it approaches either end.