In an earlier post I looked in detail at a series for inverse cosine centered at 1. The function arccos(z) is multivalued in a neighborhood of 1, but the function

is analytic in a neighborhood of 1. We cancel out the bad behavior of inverse cosine at 1 by dividing by another function with matching bad behavior.

is entire, i.e. analytic everywhere in the complex plane. From a certain perspective—namely the perspective advocated by Bille Carlson (1924–2013)—we got the definition of Bessel functions (and other functions) wrong. Carlson’s book Special Functions of Applied Mathematics shows how many special functions can be defined in terms of a smaller number of functions with fewer branch cuts. This simplification revealed symmetries that hadn’t been noticed before. 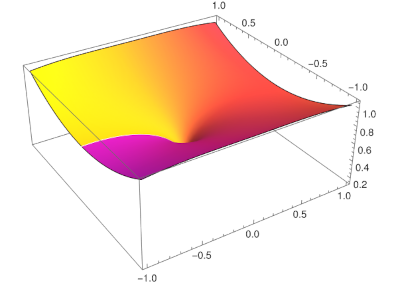 This was produced using the Mathematica command

The abrupt change from purple to yellow along the negative real axis shows the discontinuity in the phase at the branch cut. You can also see a hint of the cusp at the origin. This was made using

The white streak is an artifact of the branch cuts for J1/3(z) and for z1/3. The branch cut in their ratio is unnecessary.