This post will give a detailed example of working in a field with nine elements. This is important because finite fields are not often treated concretely except for the case of prime order.

In my first post on Costas arrays I mentioned in a footnote that Lempel’s algorithm works more generally over any finite field, but I stuck to integers modulo primes to make things simpler.

If q is a prime, then any field with q elements is isomorphic to the integers mod q. Addition and multiplication are defined just as in the integers, except you always take the remainder by q after you add or multiply.

The field with nine elements can be defined as polynomials of the form ax + b where a and b are integers mod 3, i.e. a and b can take on the values 0, 1, or 2.

You can define addition in this little field the same way you always define polynomial addition, with the understanding that the coefficients are added mod 3. So, for example,

because the leading coefficient is 2 + 1, which reduces to 0 mod 3.

Multiplication is also defined as polynomial multiplication, with coefficient arithmetic being carried out mod 3, with one more step: after multiplying the polynomials, you divide by an irreducible quadratic polynomial and keep the remainder.

The definition of multiplication brings up several questions.

There are algorithms for finding irreducible polynomials, but this is beyond the scope of this post. Here’s one we will use:

We said there are 36 irreducible polynomials we could choose. What about the other 35 we didn’t choose? They all lead to the same field, where by “same” we mean isomorphic. They generate different representations of the field, but there’s a direct correspondence (an isomorphism) between any two representations.

In one sense this is nothing to worry about, and in another sense it is. You’re not going to create something fundamentally different by choosing a different irreducible polynomial. If you and I pick different polynomials, we will agree on all the algebraic properties of our fields, but we could disagree on what the product of two particular polynomials is, like two people using two different units of measure. This can be an issue when doing finite field arithmetic with software: two software packages could give different results for a given product.

An element g in in group G is primitive if every element of G is some power of g. For example, 3 is a primitive element of the integers mod 7 because if we take successive powers of 3 mod 7 we get

That statement may sound wrong. How, for example, can a power of x equal 2x + 1? We have to remember that we’re multiplying polynomials as described above, not as polynomials over real numbers.

When we multiply x by x, we get x² of course, but then we have to divide by our choice of irreducible polynomial, which we said above would be x² + x + 2.

OK, that takes some getting used to, but now what is x³? Well, it’s x times x² of course, but what is that? As before we’ll first pretend we’re doing high school algebra, then we’ll adjust. So x times 2x + 1 equals 2x² + x. When we divide by our irreducible polynomial, we get

so the remainder is 2x + 2. Therefore in our context,

Lempel’s algorithm says to fill in the (i, j) square of our matrix if and only if

We don’t need a full multiplication table; we only need powers of x. Here they are:

Incidentally, we could use this as a sort of table of logarithms. To multiply any two elements, scan the list to find out what power of x each element is. Then add the exponents, and see what element that corresponds to.

Filling in the Costas array

For each row i, we compute xi and then find which value of j satisfies

So here we go.

Here we visualize the Costas array we’ve found as in the earlier post. The line segments between filled in cells are all unique, so we draw cell positions and the connecting lines. 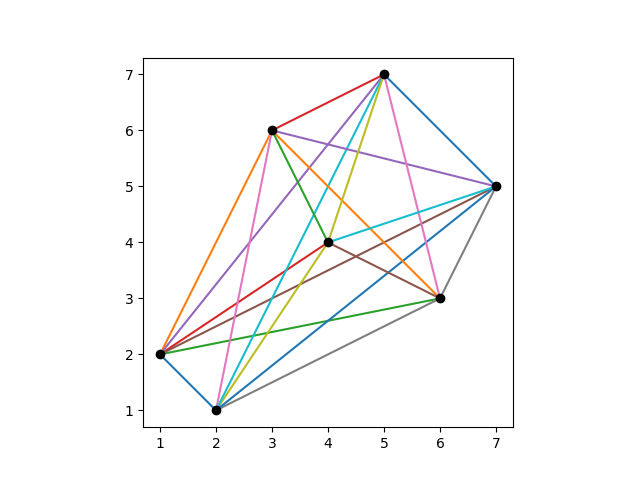 Here we translate all the lines to the origin to show that they’re distinct. 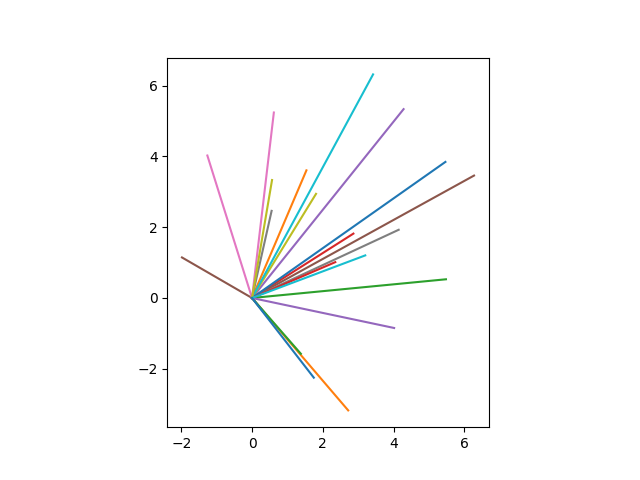 No two lines are the same, but some lines have the same slope with different lengths. To make it possible to see these, I added a small amount of randomness to the points before plotting them.