A few days ago a comment that a graph looked like a Maxwell-Boltzman density lead to an approximation of 1/Γ(x), possibly a useful approximation. 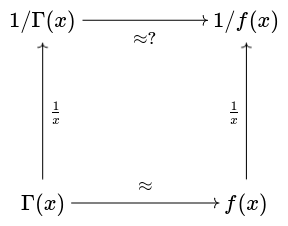 To make this question precise we have to say more about what we mean by a good approximation. If we’d like to minimize relative error, then the diagram does commute: if the ratio f/g is close to 1, then the ratio g/f is close to 1.

This means that Stirling’s approximation shines when we don’t need it to shine. It minimizes the relative error in approximating 1/Γ(x) precisely when 1/Γ(x) is so small that simply approximating it with 0 would give good absolute error.

Let’s revisit the earlier post and go into more detail. In that post we scaled 1/Γ(x) so that it integrated to 1, then we approximated the result by the PDF of a chi distribution with k degrees of freedom that has the same mode. We found that k = 3, corresponding to the Maxwell-Botlzmann distribution, doesn’t do a very good job, but k = 2 or a little smaller does much better. I said that k= 1.86 looked like a good fit.

Here’s a plot of the error in approximating c/Γ(x) with a chi distribution with 2 degrees of freedom, scaled to match modes. 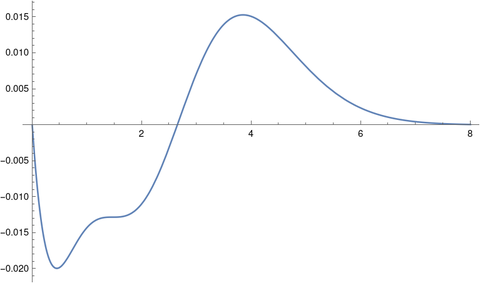