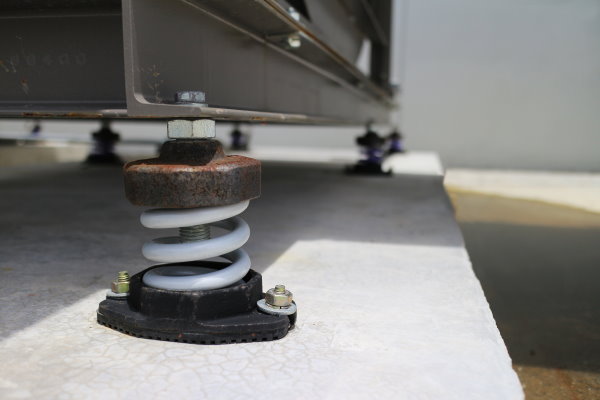 I find this subject interesting for three reasons.

This is the first of a four-part series of posts on mechanical vibrations. The posts won’t be consecutive: I’ll write about other things in between.

We could simply write down the general solution be done with it. But the focus here won’t be finding the solutions but rather understanding how the solutions behave.

We’ll think of our equation as modeling a system with a mass attached to a spring and a dash pot. All coefficients are constant. m is the mass, γ is the damping from the dash pot, and k is the restoring force from the spring. The driving force has amplitude F and frequency ω. The solution u(t) gives the position of the mass at time t.

More complicated vibrations, such as a tall building swaying in the wind, can be approximated by this simple setting.

The same differential equation could model an electrical circuit with an inductor, resistor, and capacitor. In that case replace mass m with the inductance L, damping γ with resistance R, and spring constant k with the reciprocal of capacitance C. Then the equation gives the charge on the capacitor at time t.

We will assume m and k are positive. The four blog posts will correspond to γ zero or positive, and F zero or non-zero. Since γ represents damping, the system is called undamped when γ = 0 and damped when γ is greater than 0. And since F is the amplitude of the forcing function, the system is called free when F = 0 and forced otherwise. So the plan for the four posts is

With no damping and no forcing, our equation is simply

and we can write down the solution

The value ω0 is called the natural frequency of the system because it gives the frequency of vibration when there is no forcing function.

Since the sine and cosine components have the same frequency ω0, we can use a trig identity to combine them into a single function

That’s it for undamped free vibrations: the solutions are just sine waves. The next post in the series will make things more realistic and more interesting by adding damping.