The density function of a normal distribution with mean 0 and standard deviation √(2kt) satisfies the heat equation. That is, the function

You could verify this by hand, or if you’d like, here’s Mathematica code to do it.

This returns 0 as expected.

Solutions to the heat equation are unique if we specify initial conditions. So if we start with a very concentrated heat source at time t = ε, say

where ε is a tiny but positive number, then the solution at the top of the post hold for all t > 0 and is unique.

Alternatively, we could say that if our initial condition is u(x, 0) = δ where the right hand side is the Dirac delta function, then the solution at the top of the post holds for all t > 0 and is unique. You could justify this rigorously using distribution theory (in the analytic sense, not the probability sense, though they’re related). Or you could justify it heuristically by letting ε to go zero and thinking of δ as the limit. 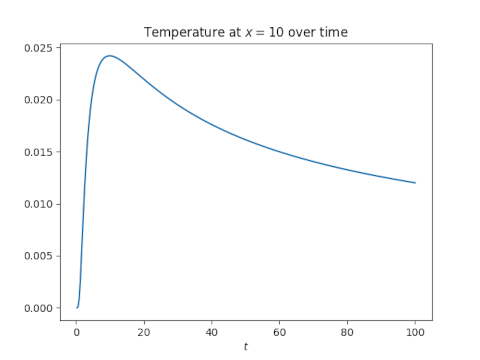 Higher order equations are less common in application, and when they do pop up they usually have even order, such as the 4th order beam equation.

This post will focus on ordinary differential equations (ODEs), but similar remarks apply to PDEs.

and its generalization, the Falkner-Skan equation

I’ve seen two linear third order ODEs in application, but neither one is very physical.

The first [1] is an equation satisfied by the product of Airy functions:

Here is a short proof that the product of Airy functions satisfy this equation.

The second [2] is a statistical model for analyzing handwriting:

Here someone decided to try modeling handwriting movements as a function of velocity, acceleration, and “jerk” (third derivative of position). It may be a useful model, but it wasn’t derived in the same physical sense as say the equations of mechanical vibrations. You could also object that since x(t) does not appear in the equation, this is a second order differential equation for y(t) = x′(t).

The previous post showed that if a vector field F over a simply connected domain has zero curl, then there is a potential function φ whose gradient is F.

An analogous result says that if the vector field F has zero divergence, again over a simply connected domain, then there is a vector potential Φ whose curl is F.

These are both special cases of Poincaré’s lemma.

This post will outline how to calculate Φ. First of all, Φ is far from unique. Any vector field with zero curl can be added to Φ without changing its curl. So if

then we can assume that one of the components, say Φ3, is zero by adding the right curl-free component. If you find that argument less than convincing, look at it this way: we’re going to solve a harder problem than simply find Φ such that ∇×Φ = F by giving ourselves the additional requirement that the last component of Φ must be zero.

This post is the third, and probably last, in a series of posts looking at vector calculus from a more advanced perspective.  The first post in the series looked at applying {grad, curl, div} to {grad, curl, div}: seeing which combinations are defined, and which combinations are always 0. To illustrate the general pattern, the post dips into differential forms and the Hodge star operator.

The second post looked at finding the (scalar) potential function for a curl-free vector field, and mentions connections to topology and differential equations.

The previous post discussed the fact that the curl of a divergence is zero. The converse is also true (given one more requirement): a vector field F is the gradient of some potential φ function if ∇×F = 0. In that case we say F is a conservative vector field.

It’s clear that having zero curl is a necessary condition for a vector field to be the gradient of a potential. It’s not as clear that having zero curl is sufficient. And in fact, it’s not quite sufficient: it’s sufficient over a simply connected domain. This means a domain with no holes: any loop you draw in the domain can be continuously deformed to a point without leaving the domain. If you’re working with vector fields defined everywhere on ℝ³ then you don’t have to worry about this condition because ℝ³ is simply connected.

For a calculus student, the requirement that a domain be simply connected is a footnote. For a topologist, it’s the main thing.

If a vector field is conservative, i.e. if it is the gradient of a potential function φ, then you can find φ by integration.

Now the partial derivative of φ with respect to y has to equal the second component of your vector field. So taking the derivative of what you found above determines your potential, up to a function of z. So then you differentiate again, this time with respect to z, and set this equal to the third component of your vector field, you’ve determined your potential function up to an constant. And that’s as far as it can be determined: any constant term goes away when you take the gradient.

A differential equation of the form

where c is a constant to be determined by initial conditions.

In the previous post, I said that solving Laplace’s equation on the unit disk was important because the unit disk is a sort of “hub” of conformal maps: there are references and algorithms for mapping regions to and from a disk conformally.

The upper half plane is a sort of secondary hub. You may want to map two regions to and from each other via a half plane. And as with the disk, there’s an explicit solution to Laplace’s equation on a half plane.

Another reason to be interested in Laplace’s equation on a half plane is the connection to the Hilbert transform and harmonic conjugates.

Furthermore, u is the real part of an analytic function f = u + iv. The function v is the harmonic conjugate of u, and also equals the Hilbert transform of u.

Why care about solving Laplace’s equation

Why care specifically about a disk? An obvious reason is that you might need to solve Laplace’s equation on a disk! But there are two less obvious reasons.

to and from the Batman logo

using conformal maps. In practice, you’d probably map Mickey Mouse to a disk, and compose that map with a map from the disk to Batman. The disk is a standard region, and so there are catalogs of conformal maps between the disk and other regions. And there are algorithms for computing maps between a standard region, such as the disk or half plane, and more general regions. You might be able to lookup a mapping from the disk to Mickey, but probably not to Batman.

In short, the disk is sort of the hub in a hub-and-spoke network of cataloged maps and algorithms.

Suppose u is a real-valued continuous function on the the boundary of the unit disk. Then u can be extended to a harmonic function, i.e. a solution to Laplace’s equation on the interior of the disk, via the Poisson integral formula:

In the differential equation post mentioned above, we started with the equation

and reduced it to

using the change of variable

So where did this change of variables come from? How might we generalize it to higher-order differential equations?

and use the change of variables

to eliminate the xn-1 term. Let’s do something analogous for differential equations.

We can turn this into a differential

has no term involving Dn-1 by solving

generalizing the result above for second order ODEs.

As with rectangular and polar coordinates, elliptic coordinates are orthogonal, i.e. holding each coordinate constant separately gives two curves that are perpendicular where they intersect. 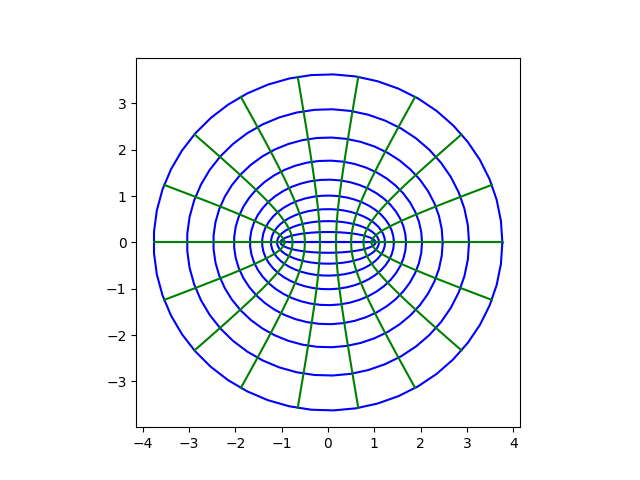 The correspondence between rectangular and elliptic coordinates is given below.

The value of a can be chosen for convenience. More on that below.

When you first see differential equations, the first, and possibly only, technique for solving PDEs you see is separation of variables. If you have PDE for a function of two variables u(x, y), you first assume u is the product of a function of x alone and a function of y alone:

Then you stick this expression into your PDE and get independent ODEs for X and Y. Then sums of the solutions (i.e. Fourier series) solve your PDE.

Now, here’s the kicker. We could do the same thing in elliptic coordinates, starting from the assumption

Separable coordinate systems get their name from the fact that the separation of variables trick works in that coordinate system. Not for all possible PDEs, but for common PDEs like Laplace’s equation. Elliptic coordinates are separable.

If you’re solving Laplace’s equation on an ellipse, say with a constant boundary condition, the form of the solution is going to be complicated in rectangular coordinates, but simpler in elliptic coordinates.

The coordinate ellipses, curves with μ constant, are ellipses with foci at ±a; you can choose a so that a particular ellipse you’re interested has a particular μ value, such as 1. Since all these ellipses have the same foci, we say they’re confocal. But confocal elliptic coordinates are something slightly different.

Laplace’s equation is still separable under this alternate coordinate system, but it looks different; the expression for the Laplacian changes because we’ve changed coordinates.

A major theme in the modern approach to partial differential equations is to first look for solutions in a space of generalized functions, then (hopefully) prove that the generalized function that solves your equation is a plain old function with derivatives in the classical sense.

The Dirac delta function δ acts on a test function φ by returning φ(0). This is not a regular distribution because there is no function you can integrate against φ and always get φ(0) out.

In the previous post we found a solution to

using operator calculus, i.e. treating the differential operator D like a number and doing tricks with it. See the earlier post for a justification of why we can get away with unorthodox manipulations.

but the method works more generally.

We then find a power series for 1/p(D), most likely by partial fraction decomposition, and apply the result to f(x). There may be a fair amount of labor left, but it’s purely calculus; all the differential equation work is done.

Conceptually, this method subsumes other differential equation techniques such as undetermined coefficients and power series solutions.

Let’s use this method to find an approximate solution to

where ζ(x) is the Riemann zeta function.

Numerically this works out to