A group is a set with a binary operation that

This post will look at each of these properties and what happens if you modify or remove it.

Closed means that applying the binary operation to any two elements of the set yields another elements of the set. (I saw a book one time that had at the top of some chapter a quote something like “The product of two real numbers is a real number; we should be surprised if it were a head of cabbage.”) For example, the positive integers are closed under multiplication but not under division.

A set with a closed binary operation is called a magma.

Associative means that you can parenthesize an expression any way you want and always get the same result. It may be practically important how you parenthesize an expression. For example, matrix multiplication can far fewer operations if you carry out the multiplications in the right order. In programming, left folds and right folds (such as foldl and foldr in Haskell) may have very different efficiency, but they’re supposed to return the same result if you’re folding an associative operation.

A magma with an associative operation is called a semigroup.

Differential equation theory is concerned with analytic semigroups. If you advance the solution of an evolution equation by a positive time increment t and then by an increment s, you end up at the same place as if you’d advanced the solution by t + s.

Notice that the time increment is required to be positive. That’s because the initial conditions for an evolution equation might reside in a different function space than the solutions at any future time. That’s the case, for example, with the heat equation, where initial conditions can be rough but the solution smooths out immediately as you move forward in time.

If you add the requirement that a semigroup has an identity, you get a monoid. Partial differential equation theory is more concerned with analytic semigroups than analytic monoids for the reason explored above: you might not have an identity.

A monoid in which every element has an inverse is a group. 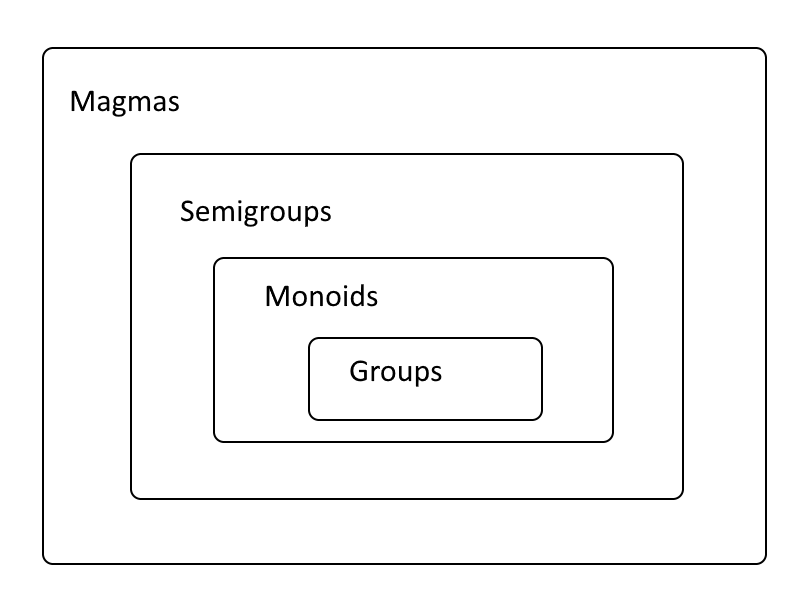 So far we’ve built up a progression of stronger and stronger requirements leading up to groups, starting with requiring that our operation is associative. What if we don’t have associativity, but we do have other properties?

Non-associative operations are less common. Perhaps the best known operation that is not associative is octonion multiplication.

But division is possible for octonions, except for 0, and so non-zero octonions form a quasigroup, a magma with division.

A quasigroup that has an identity element is called a loop. Note that for quasigroups we said “division is possible,” not that elements have inverses. If elements do have inverses, then you can divide by an element by multiplying by its inverse. But you can define division by the ability to solve equations. We say you can divide b by a if ax = b and ya = b have unique solutions.

A loop with associativity is a group.

Loops are not required to have an associative property, but they may satisfy a weak form of associativity.

A Moufang loop is a loop that satisfies these requirements:

Moufang loop are still not required to be associative, but they’re getting closer. And as you might have anticipated, non-zero octonions with respect to multiplication form a Moufang loop. 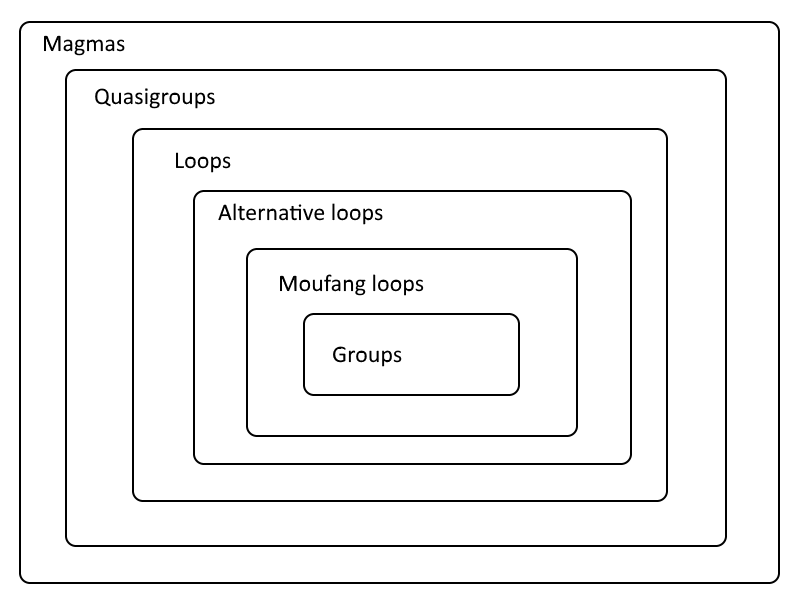 2 thoughts on “Weakening the requirements of a group”