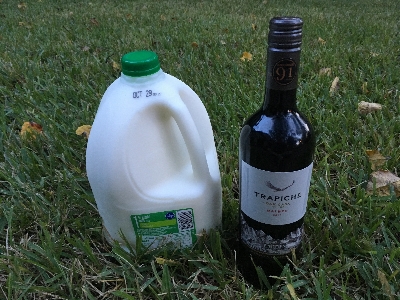 The US uses a mix of imperial and metric units of measure. Some people, almost all outside the US, are quite agitated by this. In practice, the two systems coexist peacefully.

For practical purposes, milk is sold in units of jugs, not gallons. And wine is sold in units of bottles, not milliliters. When I go to the store to buy a jug of milk or a bottle of wine, I’m not that aware of the units. If overnight the size of a milk jug changed from one gallon to four liters, or if wine went from 750 milliliter bottles to 25 fluid ounce bottles, no one would know.

If you went to a store determined to buy exactly equal volumes of milk and wine, you couldn’t do it. You’d need to buy more containers of each than any store could possibly sell [1]. But nobody ever does this.

And if for some bizarre reason you really did want to buy equal volumes of milk and wine, the biggest problem would not be gallons versus milliliters but rather the uncertainty in both. A jug of milk isn’t exactly one gallon, nor is a bottle of wine exactly 750 milliliters.

9 thoughts on “Milk and wine”